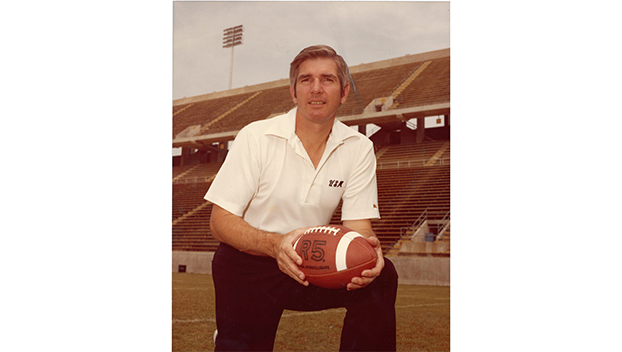 Southern Miss's former head coach Bobby Collins died this week. Collins oversaw the Southern Miss football program from 1975-1981 and posted a 48-30-2 record over his seasons at the helm of the Golden Eagles.(Courtesy Photo | Southern Miss Athletics)

Collins oversaw the Southern Miss football program from 1975-1981 and posted a 48-30-2 record over his seasons at the helm of the Golden Eagles.

When Collins arrived in Hattiesburg from the University of North Carolina in 1975, he inherited a Golden Eagle football program still struggling to find its identity in Division I football. Not only was the program struggling to find its identity, but also looking for a home. With the renovations of M.M. Roberts Stadium underway, Collins coached his first 13 games on the road before finally playing a game in Hattiesburg.

Collins, though, had a plan that he felt could deliver the Golden Eagles into the national spotlight.

Unsure of exactly how long it might take, Collins knew two things. One, they drew a circle in a 300-mile radius of Hattiesburg and get the best players and, two, defeat Ole Miss and Mississippi State to enhance their ability to recruit the top players in the state.

Playing every game away from Hattiesburg, his first team in 1975 surprised everyone by finishing with an 8-3 record. They won six of their last seven games, then after losing its first nine games in 1976, the team turned the corner, winning the final two games over Memphis State and Texas-Arlington, spoiling those teams bid for a postseason berth.

Collins’ plan began to pay dividends when the 1977 team went 6-6, but recorded wins over Auburn, Ole Miss and Mississippi State. The Golden Eagles were beginning to believe and many top players were now looking at Southern Miss in a different light.

But Collins wasn’t relying solely on blue-chip prospects; he and his staff had an amazing ability to find players no one else paid much attention. Collins was able to look a couple years down the road and see how good a player they could develop into and where they could play.

In 1980, the Golden Eagles opened the year with six-straight wins and moved into the Associated Press poll for the first time as a Division I school, when they were ranked No. 20 on October 20. That team went on to finish 9-3 and earn a berth in the Independence Bowl, the school’s first post-season bowl bid since 1957.

The 1981 Bobby Collins team was arguably the best in school history. With Sammy Winder, Reggie Collier, Marvin Harvey and the Nasty Bunch defense, they started the year with four-straight wins, tied No. 7 Alabama, then won four more to improve to 8-0-1 and earn a No. 9 ranking in the AP poll and a No. 8 ranking in the UPI poll. That team finished 9-2-1 and played in the Tangerine Bowl.

Seven years after quietly promising to move the Golden Eagles into the national spotlight, Bobby Collins had done it.

Collins left Southern Miss after the 1981 season to take over at SMU where he posted a 43-15-1 record and played in three bowl games. He later returned to Southern Miss to work as a fundraiser for the athletic department.His football roots began at Laurel High School where he was a standout athlete and then to Mississippi State, where he had a stellar career for the Bulldogs.

Upon graduation from Mississippi State, Collins turned his attention to coaching and quickly became one of the most respected assistant coaches in college football. when Southern Miss went looking for a new head football coach following the 1974 season, his name was right at the top.