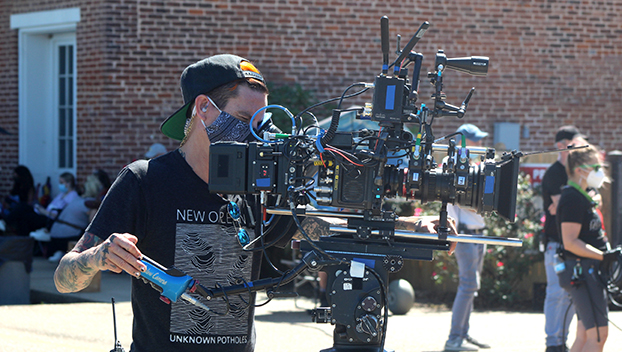 Elliot Brasseaux with Evergreen Productions works on filming a scene along Silver Street outside of Magnolia Grill. (File photo | The Natchez Democrat)

NATCHEZ — Just before Evergreen Productions’ Christmas film “Every Time a Bell Rings” is released to Hallmark’s digital subscribers on Thursday, the studio has sent out a casting call for its next project to be filmed in Natchez this December.

The studio issued a call for extras in Natchez on social media for its next film, called “Christmas in the Quarter.”

Executive Producer Daniel Lewis announced earlier that he had been so pleased with Natchez’s response to the first film, “Every Time a Bell Rings,” that he decided to pull the production that he planned to shoot in New Orleans and film it in Natchez instead.

“Our upcoming project will be centered around a black family and is set in the city of New Orleans,” Evergreen states in a social media post Wednesday. “Our background needs to be as diverse as possible to properly represent New Orleans and the family in our movie. So we would like to encourage as many racially diverse men, women, children to be submitted as possible so we can achieve this goal for our film. Pass this along to your friends and family members and encourage them to sign up if they are available during our shoot dates of Dec. 2 (through) 17.”

Those interested in being cast in the film can fill out an entry form by clicking here.