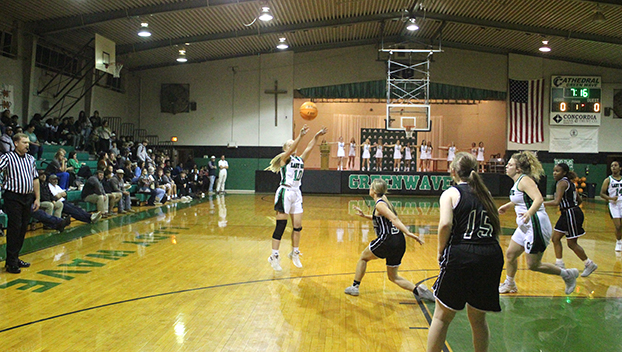 Cate Drane shoots one of her six threes in the Lady Wave’s game against Park Place. Drane scored 26 points and led the team in scoring as they won 48-28 Thursday night. (Hunter Cloud | The Natchez Democrat)

NATCHEZ — Cathedral’s Lady Green Wave dominated in their 48-28 win over Park Place Christian Thursday night. Offensively, they rebounded the ball well in the paint in their 20-point win.

Senior Cate Drane shot lights out in the game. She scored 13 points in the first quarter as she came out the gates on fire. In total, she drained six threes to lead the Green Wave in scoring.

Head coach Bernita Dunbar said she felt her team won the rebound battle and got the ball out to their guards to recycle the play. It was exactly what they worked on this week in practice. Drane had a great night. She has become more selective of her shots and grown as a shooter, Dunbar said. In warmups, Drane said it felt like a normal game.

“When I start to think about shooting, I get hard on myself, so I try to stay calm in warmups so I can stay calm in the game,” Drane said. “My strong start motivates me. When you don’t start in good form, you play bad. When you make shots, you start to feel good, and it pushes the team to move forward.”

As a team, the Green Wave could have shot the ball better, Dunbar said.

“We have to come back and work a little more on our shooting drills,” Dunbar said. “It is just repetition in practice and drills that we need.”