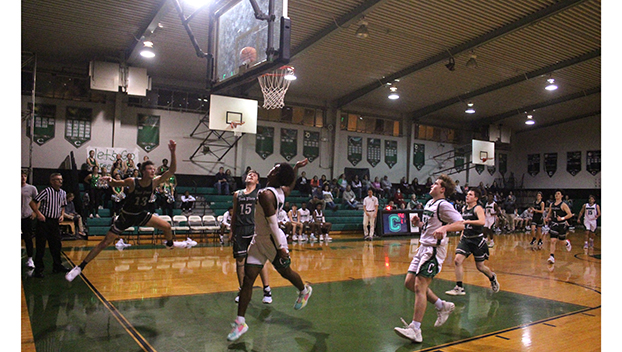 Cathedral’s Christian Wright watches as his shot bounces off the iron. Wright had 17 points for the Green Wave as they fell 63-56 against Park Place Christian Thursday night. (Hunter Cloud | The Natchez Democrat)

NATCHEZ — Late in the third quarter, Cathedral took its first lead of the night against Park Place Christian. However, their lead would not last long as Park Place charged back en route to a 63-56 win over the Green Wave Thursday night.

Cathedral did not get off to a good start. At the end of the first quarter, Cathedral had just nine points on the scoreboard, and until late in the second quarter, they could not get anything going on offense. The slow start was the difference in the game as head coach Taylor Strahan said they were not ready.

“It was the first test we have had this year,” Strahan said. “They were not ready for what they had. I think we played our game the rest of the way, and it bites you in the end to have a slow start.”

Senior guard Christian Wright finished the game with 17 points and helped spark the comeback for the Green Wave. Late in the second quarter, he scored 10 straight points for the Green Wave as they started to make a comeback.

“It was more our pace, and we shared the ball,” Strahan said. “We played great until the end of the fourth quarter, and then we could not make our free throws down the stretch.”

It was a one-possession ball game until about a minute left in the fourth quarter when Park Place started to pull away. Cathedral threw up a few three-point shots as time melted off of the clock. If Cathedral makes its free throws, the game might have ended differently. It is something the players will have to work on, Strahan said.

“We are new into the season, and most teams won’t shoot well early,” Strahan said. “It is a long season, and we have to get better at it. You have to learn what you did wrong and improve on it.”