Delta Charter falls in bi-district round 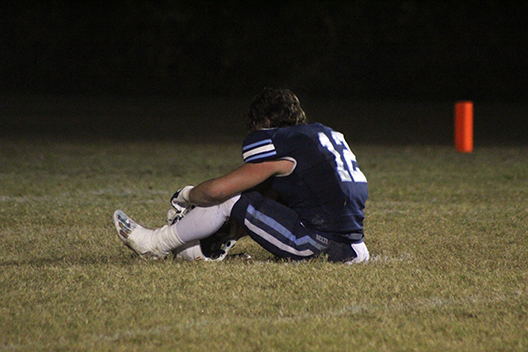 FERRIDAY — Delta Charter senior Payten Roberts sat in the endzone with his helmet off as the final seconds rolled off the clock. Basile players celebrated at the opposite end of the field after beating Delta Charter 26-14.

One Basile player came over to console Roberts. Players, friends and family came over to give him a hug. Storm head coach Blake Wheeler said “I love you son. You’re not just a great player but a good man,” as he hugged him.

Roberts said in his career at Delta Charter it was the teammates and the fanbase who stood out to him. Every moment and practice he will cherish, he said. His drive was to always give 100 percent.

“I’m going to miss it a lot,” Roberts said. “I wanted to show everybody I have what it takes to be a great athlete. Losing is not an option.”

The whole team played like losing was not an option. They had opportunities to put more points on the board then what they had but penalties and an interception late in the game sealed their fate.

Basile got off to a great start to the game as they drove 72-yards running the triple option. After Delta Charter scored on a 39-yard rush by Juvari Singleton, they scored again on a 65 yard drive to take a 13-8 lead. It was a lead they would hold until halftime.

On the Storm’s first possession, they drove the ball down the field and got to Basile’s 30 before penalties pushed them back and forced a punt. Their opponents capitalized and scored to take a 20-8 lead. Consistently, Basile gained about six or seven yards on first down and moved the chains on second down. Roberts said it was hard to stop.

“It’s hard to stop because everyone has to do their job,” Roberts said. “If one person misses their assignment the whole play is busted. Everyone has to give 100 percent on every play.”

Delta Charter responded in the fourth quarter by driving the field and scoring in three minutes to cut the lead to 20-14. Singleton scored a two-yard rush for the Storm.

Basile put away the game with 3:55 left in the game after they intercepted a pass from Singleton. Players were still fighting for the win up until the last whistle though.

“I thought we played hard until the final gun. I’m proud of this team,” Wheeler said. “We had a lot of young kids and them having a taste of success, we will use to build off of it. They are ready to put the work in and we go back to the weight room and get bigger and stronger.”