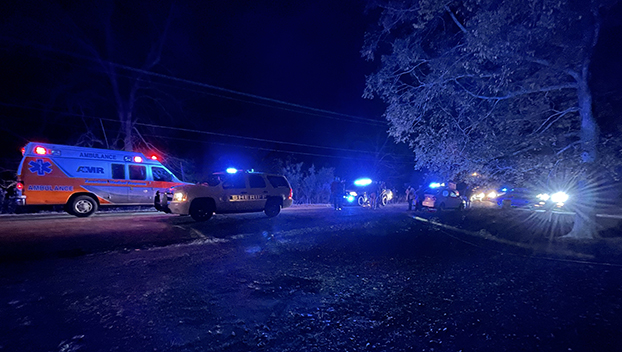 Sheriff’s deputies arrested Adrian Ali Harris, 42, on a murder charge in connection with the shooting death of 59-year-old Marion Hunt on Thursday evening.

Adams County Sheriff Travis Patten said Harris is Hunt’s nephew. He added he is unsure what caused the shooting at this time.

A news release from ACSO states that officers were dispatched to a call about multiple shots being fired just before 9 p.m. Thursday in the area of Old Courthouse Road. Upon their arrival, deputies were directed by residents to 34 Old Courthouse Road where the shots appeared to have come from.

After searching the property, officers found Hunt unresponsive behind the steering wheel of his pickup truck with multiple gunshot wounds.

“The victim was found sitting at the wheel of a parked truck at 34 Old Courthouse road,” Lee said. “This type of killing is above my understanding. If you fire a weapon more than once, it shows intent to kill in my opinion. This was tragic. I will continue to offer prayers for cases like this one to both families. No one wins. Our community and town suffers when these things happen. The (body) will be transported to the state crime lab for autopsy to determine the manner of death.”

According to the release, witnesses told sheriff’s deputies that they saw a suspect, identified as Harris, leaving the scene after shots were fired. As the crime scene was being processed, Harris returned to the scene and was placed in custody without incident, the release states.

Harris has been charged by ACSO with murder is being held at the Adams County Jail. He currently has no bond pending arraignment.