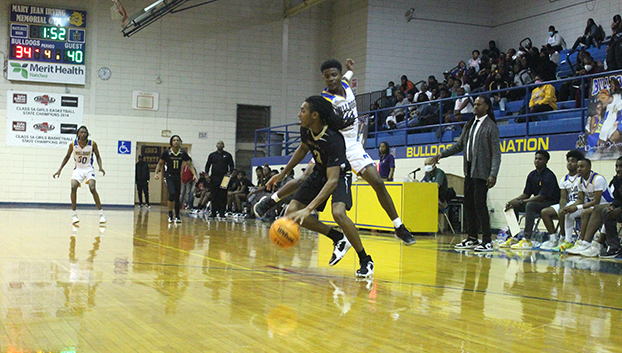 Natchez senior Mike Williams jumps up n the air to try and stop a pass as Amite County tries to break out of the press. Natchez lost to Amite County 44-39 Tuesday night. (Hunter Cloud | The Natchez Democrat)

NATCHEZ — With two minutes to go in the game, Natchez found itself down by three points. Amite County drilled back-to-back three-pointers to quiet the home crowd and seal the Trojans’ 44-39 win Tuesday night.

“When we weren’t making shots, we lost our energy,” Haywood said. “It’s nothing to be concerned about. I think we will get back in practice and watch the film to clean it up.”

After the first quarter, Natchez led 12-9, but Amite County hustled its way back into the game and took the lead, which they would hold for the rest of the game.

Playing hard is part of the Trojans’ identity, and Natchez had to battle out a win last week at Amite.

The Trojans returned the favor as their fans cheered and players celebrated as the final buzzer blew. Despite the Bulldog loss, Haywood feels his team has made strides in the first five games.

Their leading scorer from last season Cameron Carter is out with a fractured thumb. He hopes to have a developed team for when he comes back so they can start rolling.

“Right now, we are trying to guide our guys and play at a higher level, so when he comes back, he will give us a boost,” Haywood said.