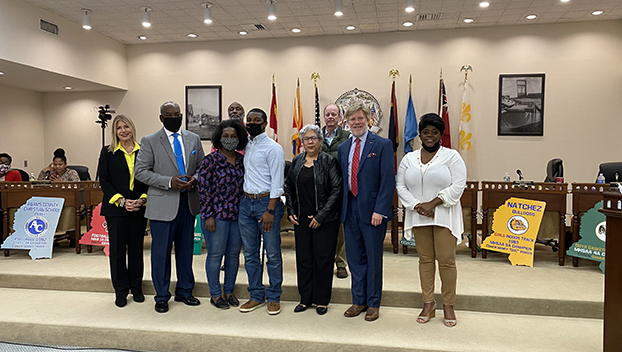 At its Nov. 9 meeting, the Mayor and Board of Aldermen pose with Natchez High Senior Albert Hughes IV, front row fourth from left, who led 13 of his classmates on a project to paint playground equipment, make other improvements and clean up Jack Waite Park. (Jan Griffey | The Natchez Democrat)

Gibson said he was referring to comments made by Ward 4 Alderwoman Felicia Bridgewater-Irving at the board’s last meeting on Nov. 9.

At that meeting, Irving asked to address the “elephant in the room,” and went on to claim she had been disrespected specifically by Ward 1 Alderwoman Valencia Hall, who she said did not notify her of a Natchez High School project that took place the Saturday before at Jack Waite Park, which is in Irving’s ward.

The leader of that project, Natchez High senior Albert Hughes IV was at the Nov. 9 meeting to discuss the project with the board and his desires and the desire of his classmates who worked with him to do more.

On Tuesday evening, Gibson said he had gone back and researched the record and found that on Oct. 12, Hall had discussed the project in her aldermen’s report. Gibson played a video of that discussion for the board members and those present.

Further, Gibson said, he discovered that a meeting was conducted on Tuesday, Nov. 2, at 9:30 a.m. at Jack Waite Park between the city’s Parks and Recreation Director Senora Cole and Irving, during which Irving was provided details of the project that was going to take place the following Saturday by the 14 Natchez High students.

“The elephant in the room was this board was made aware of that project on Oct. 12, and a meeting took place at that park during which all details of that project were thoroughly discussed beforehand,” Gibson said.

He also said he checked with Debbie Hudson, director of the Natchez-Adams County Chamber of Commerce, who schedules ribbon cuttings for new businesses and confirmed that each alderman is on the chamber’s email list and are notified by email of those events. Irving also complained at the Nov. 9 meeting that no one with the city notified her about a ribbon cutting ceremony held at a business in her ward.

“The reason it is so important to address this is our children are watching…I believe it was egregious, when we are celebrating youth, to use that opportunity to try to build potential division. We will call that out. It doesn’t need to happen,” Gibson said.

Irving said she did not and would never disrespect children. Rather, she was addressing the disrespect she claimed is often shown to her by the mayor and certain other aldermen, who she did not name.

“I still stand by what I said,” Irving said at Tuesday’s meeting. “She (Hall) had knowledge (of the project) prior to her talking about it on Oct. 12. She should have come to me before that.”

Irving said she consistently does not receive the information she needs to make informed decisions on city matters because of the committee structure of the board. The Board of Aldermen is divided into a number of committees, such as the parks and recreation committee or the law enforcement committee. Those committees discuss and fact find on issues before they are taken to the board as a whole. When they come to the board, the committee makes a recommendation on the issue.

“We have no discussion. We just want a vote. That has happened time and time again. If something is going on, I should be informed about it,” Irving said. “I’m not looking for recognition, but I do want to be informed…Things are not transparent with this board.”

Ward 6 Alderman Billy Jo Frazier came to Irving’s defense and said her comments at the Nov. 9 meeting were not directed toward the students and were not meant to disrespect them.

“I don’t think she disrespected those children,” Frazier said.

Ward 3 Alderwoman Sarah Carter Smith, who was attending Tuesday’s meeting via a video online connection, asked Irving why she did not attend the ceremony held on Friday, Nov. 19, to honor the students who did the work at Jack Waite Park.

“My mother always told me if you are not invited on the front end, there’s no use showing up on the back end,” Irving said.