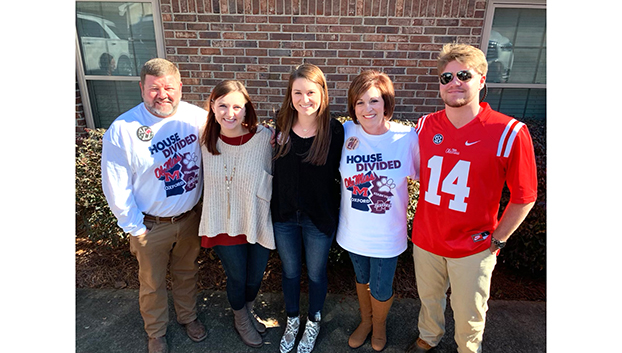 From the 2018 Egg Bowl in Oxford. Mississippi State won 35-3 and there was a brawl in the endzone before halftime. From left, John Hicks, Erin Hicks, Emily Hicks, Courtney Hicks and John Ashton Hicks. (Submitted Photo | The Natchez Democrat)

Hicks Chicks is a house divided by the rivalry as John Ashton Hicks and his sister Erin Hicks are diehard Ole Miss fans and their sister Emily Hicks is a MSU fan.

As an Ole Miss fan, Erin said her team likes to blow leads late in games and get their fans’ hopes up. Lately the games have been pretty crazy, her brother John Ashton said.

“It comes around once a year and you never know what to expect,” John Ashton said. “There is always something crazy. Everyone is fighting for the top spot in the state. Whoever wins this year could finish second in the SEC West.”

Erin and her brother became Ole Miss fans when they were younger because they enjoyed watching sports together. Erin almost accepted a sports trainer scholarship to Ole Miss for basketball, but instead chose to go to Mississippi College to study pre-med. John Ashton is currently in law school at Ole Miss.

Now, they spend every home game together at the Delta Peach Rebels tailgate in The Grove.

On Friday nights, they go to The Grove to help set up the tent close to the Walk-of-Champions to support the football team. It is a time they can share together.

“We have been big fans our whole life,” Erin said. “I did not go to my first Ole Miss game until I was a freshman in high school. I never stopped going after that. This was my first year I could go to every home game.”

For the last five or six years, John Ashton has been going to Egg Bowls with his girlfriend and her family, who are Mississippi State fans. Three years ago, the Hicks family started the tradition of going to Egg Bowls together in both Oxford and Starkville.

“I enjoy it. The atmosphere and culture is different at any SEC stadium,” John Ashton said. “You want to beat your rival but there is not as much hatred. You have a little more respect for others.”

Their sister Emily went to MSU. Emily said the three Ole Miss fans in her family give her grief all the time but Cowbells drown out their chants.

On game day, things can be pretty heated and their mom Courntey has to separate the kids, Emily said. Usually this only happens in Starkville because if they are in Oxford they are usually happy.

“They hate the cowbells. I like to aggravate them with it,” Emily said. “Usually, my mom is in the middle trying to keep the peace. She will have a pom-pom in one hand and a cowbell in the other.”

This year will be the first time the family will not go to Starkville to watch the Egg Bowl, Emily said. It may work in her favor since her aunt Susan and uncle Chip Williams are MSU fans and will be in town to watch the game.

At the end of the day, the rivalry game is all love. While jabs and jokes are thrown around, it is an event the family shares, John Asher and Erin said.

“When I think of Thanksgiving I think of family and spending time with family,” Erin said. “I also think of the Egg Bowl.”