Collaboration between agencies leads to arrest of man wanted for shooting

NATCHEZ — On Tuesday night, local law enforcement agencies arrested a man and convicted felon who was wanted for shooting into a vehicle, occupied dwelling and firing inside of the city limits of Natchez on July 28 in the area of Lafitte Street.

The Natchez Police Department solicited help from the community for any information that would lead to the arrest of Khadijah Mosby, age 28, in connection with the July shooting incident. 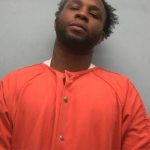 He has been charged with possession of a firearm by a felon, shooting into an occupied dwelling, shooting into a motor vehicle and firing inside the city limits of Natchez.

He has bond set as if Wednesday afternoon.

“We’ve been working with NPD searching and looking for ever since he was accused of the charges against him,” Adams County Sheriff Travis Patten said. “Last night (Tuesday) we received information regarding his whereabouts, went to the residence and made contact with him and made the arrest without incident.

“He has been in and out of prison on multiple other charges before this,” Patten added. “It’s unfortunate for him and we hope that he gets his life on track. He is off the streets and in custody and hopefully the victims will find peace in that this holiday.”