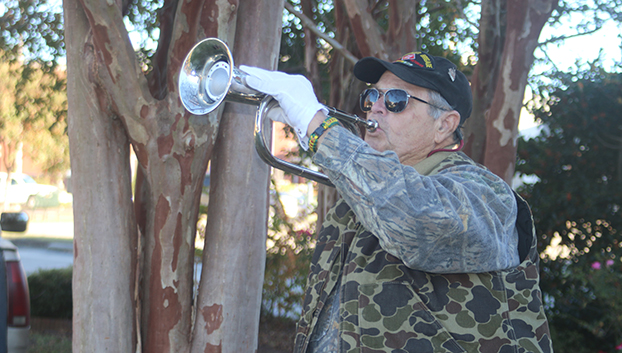 NATCHEZ – Smoke drifted through the air near the Natchez Convention Center on Nov. 13. The reason: Scouts performed a solemn ceremony to retire worn and faded American flags.

Several dozen flags were burned in a ceremonial cauldron; each flag was given a proper salute as it was placed on the fire, and a bell was rung symbolizing the farewell.

The ceremony was sponsored by Scout Troop 168 and the Home With Heroes Foundation.

“We are gathered here today to destroy these flags that have been deemed no longer serviceable. It is proclaimed that these flags have served well,” said Warren. “These flags have inspired those who desire a taste of freedom, and it represented hope by those oppressed by tyranny and terror.”

Warren said, “The American flag is the most recognized banner in the world. These flags serve as constant reminders to all of us that we live in a country where our freedom has been purchased by blood, sweat, tears, and the ultimate sacrifice.”

Justice Court Judge Eileen M. Maher offered the opening prayer. “Our Dear Heavenly Father, Commander over all, we ask that you bless and consecrate this special occasion….Flags no longer serviceable due to their previous long, honorable and worthy service. As we give up their substance to the fire, may your spirit touch all of us, renewing and strengthening our dedication and devotion to our great United States of America.”

The ceremony is one of several held throughout the year in the community to honor scores of used flags donated by area residents and businesses.

Veteran Doug McCallister provided the cauldron where the flags were burned. McCallister concluded the ceremony by playing “Taps” on his bugle.