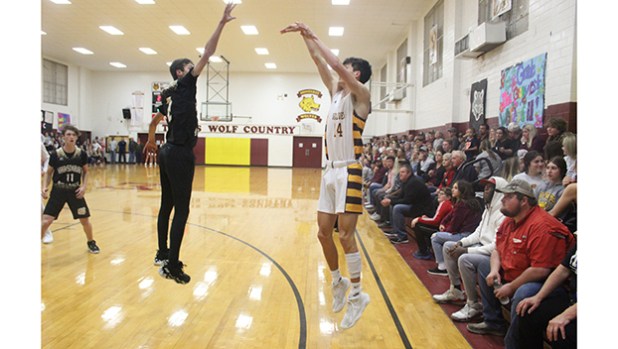 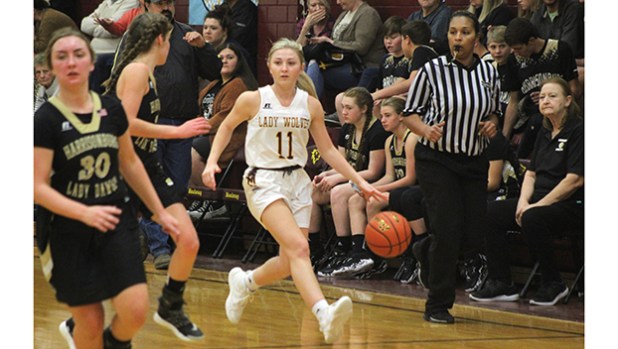 Monterey guard Allie Lipsey pushes her team up the court in the second half of a game against rivals Harrisonburg. The Lady Wolves had a stingy defense and Lipsey had 11 points for the Lady Wolves in a 41-10 victory Tuesday night. (Hunter Cloud | The Natchez Democrat)

MONTEREY — Monterey returned from their Thanksgiving break with back-to-back games. The Lady Wolves lost to LaSalle 42-39 Monday night but bounced back strong with a win over rivals Harrisonburg 41-10 Tuesday night.

Allie Lipsey had 11 points for the Wolves in their win. She said they were a little tired from last night’s game, but it felt good to beat their rivals. Defensively it was a stingy effort as they yielded just three points in the first half of play.

Eric Richard is to thank for the change in defensive philosophy. He coached the girls’ team for the first time last season. Since then, he brought with him a zone defensive scheme, Lipsey said. Last season was a challenge, but they are all clicking together as a team now.

“(Richard’s) first year we lost a lot of girls, and we were young. Now we are way closer, and it contributes to our play as well,” Lipsey said. “It was a transition which worked out. Moving to a zone has slowed us down, so we aren’t as chaotic. Playing zone helps us slow the game down.”

The senior has played basketball at Monterey since she was in sixth grade and said she couldn’t imagine losing to them her senior year.

Monterey is a community with a passion for basketball. While most schools are playing football on Friday nights under the lights, Monterey is gearing up for a season on the hardwood. Lipsey said the fans create a great environment to play in.

“It’s loud and we have a lot of fans,” Lipsey said. “When we travel, our fans will outnumber the other fans. It is a lot of fun playing in the small gym. The commotion is good.”

She loves the game of basketball because of the fast-paced play.

“We want to get as far as we can get,” Lipsey said. “We want to win as many games as possible and improve each game.”

Fans filled the stands and took up every available parking space at Monterey High School. The boys’ game against Harrisonburg started as a close game. Both teams probed each other’s defense. At one point, Harrisonburg led 6-4 before the Wolves hit a stretch of threes and pulled away to a 46-21 win.

Head coach Eric Richard said he was responsible for the team’s performance. They had not had a single practice since Thanksgiving break and played a game against LaSalle Monday night, which they won.

Despite the sluggish restart, Monterey managed to win both games. Richard said he could not be too mad about that. His team finally got shots to drop to rally to victory Tuesday night, he said.

“We got a few turnovers and finally made a few shots in the second quarter,” Richard said. “We could not get anything to go through the basket although I thought we had some good looks. I think that was because we missed that time in the gym.”

Harrisonburg is similar to Monterey in its small size. The two have historically been rivals, but now the rivalry has become friendlier as they support each other’s programs. Both schools have fans who travel well, Richard said.

Monterey hosts a tournament this weekend, and then the following weekend, they would travel to Harrisonburg to play basketball.

“We enjoy competing against each other, but we also depend on each other. Our fans do a good job of supporting the programs,” Richard said. “We are going to practice at 6 a.m. Thursday before we play again this weekend. Hopefully, we can get back into some kind of rhythm. We aren’t playing with a good flow right now. Hopefully, we can get back in a good rhythm of play. These are good kids. We will find we are at the same place we were before this holiday break after this weekend.”