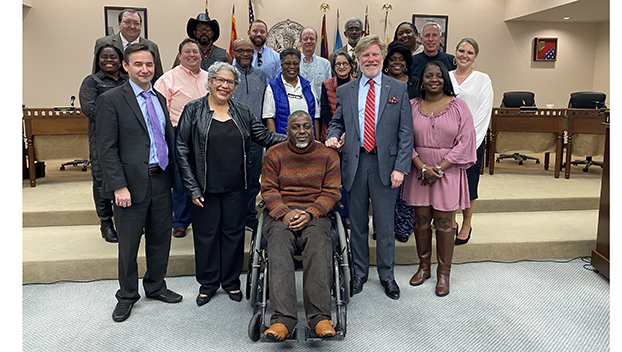 NATCHEZ — Adams County, the City of Natchez and the Natchez Adams School District have unanimously agreed to hire Tuwanna Williams as director of workforce development.

The three entities are in the process of final steps of forming an inter-local agreement to work together to build and operate a workforce development facility to provide comprehensive jobs training here. Williams’ hiring is pending the completion of that agreement, which is anticipated to happen within the next 10 days.

“We had good response. We received 11 applicants and interviewed three finalists,” he said. “All on the search committee agreed Ms. Williams was most qualified.”

The director will be a City of Natchez employee. The alliance between the three boards will then contract with Natchez Inc., which will provide an office from which Ms. Williams will work and Chandler Russ, Natchez Inc. executive director, will provide day-to-day supervision. Hire and fire authority over the workforce development director position will remain with all three boards, Gibson said.

Williams was not present at Wednesday’s special meeting of the three governmental bodies, but she is expected to begin her position as workforce development director in two weeks. Gibson said her first order of business would be to get grant applications prepared and submitted before a Jan. 27, 2022, deadline.

“We are one of the first cities, counties and school boards to come together to provide workforce development,” he said.

Philip West Jr., president of the Natchez Adams School District board and former Natchez mayor, said he expects his board to ratify the agreement at its meeting on Tuesday, Dec. 7.

“We have all agreed with the organization and structure,” West said. “By doing it this way, we can have more of an impact on this community. It can result in a better community and we can move forward quickly and perhaps expand beyond workforce development.

“Workforce development can encompass the whole community, not just those students who are in school. We can identify and incentivize people to come back to this community, which gives us a better quality of life in the long run,” he said. “As a school board, we have got to bring all of our students up to par.”

Adams County Board of Supervisors President Angela Hutchins has been a workforce development advocate since being elected to the county board.

“I have been wanting for this to happen for a long time,” Hutchins said. “Not everyone wants to go to college.”

District 5 County Supervisor Warren Gaines, who teaches diesel mechanics at Co-Lin Natchez, said he has enjoyed seeing the visions of others for the community and learning the common ground they have.

Natchez Inc.’s Russ applauded the members of each board and said, “Workforce development is a critical part of the foundation for economic development in this region. Having a qualified and solid work force for businesses we have here and others who may be coming our way is critically important.”

Adams County Sheriff Travis Patten thanked the group and told them providing job skills people need is the difference that could turn someone away from a life of crime.

“What you have done today is a huge step toward reducing our recidivism rate,” Patten said. “We see success when we give people a hand up, rather than a hand out.”

Cowboy’s McCarthy out for game against Saints after positive…