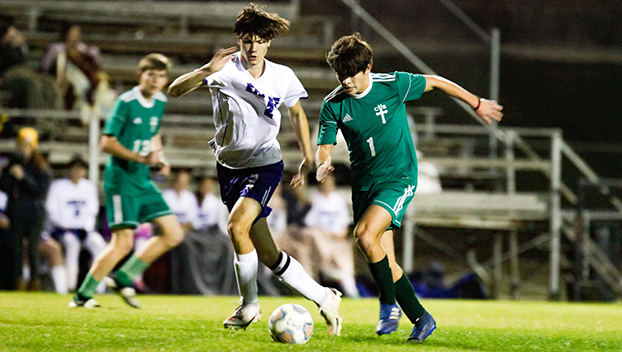 NATCHEZ — At the final whistle, Cathedral defeated Porters Chapel 4-0 with three goals in the second half and a hattrick by Tristan Fondren. Head coach Dennis Hogue said the game did not get off to a good start.

It took nearly the entire first half for Fondren to tap a ball into the goal and put the Green Wave on the scoreboard. Cathedral played the game without juniors Grayson Guedon and John Carter Austin, who were out sick.

They make up the “Fantastic Four,” a group of attacking players in the squad who have played soccer together for a very long time. Jacob Moore, Guedon, Austin and Logan Ellis make up the core group. Missing two of those players caused a slower start, Hogue said.

“The timing was off. We were trying to get in sync,” Hogue said. “Everyone had to adjust their game to make up for the play difference. This is a team we historically play well. It was a slow but interesting first half and left us scratching our heads.”

Younger players stepped up into a varsity role without much playing experience. Tactically, the Rebels are keeping older players on the backline to have a strong defense. Hogue said his philosophy is that the other team can’t win if they can not score on you. Goalkeeper Joseph Garrity is the lone senior on the squad.

At the half, Cathedral was up 1-0, and Hogue said he was trying to think of an adjustment he could make. If he sent an experienced player up top, he would leave the backline prone Porters Chapel using speed to capitalize on a ball played behind the defense.

“I decided we couldn’t make any adjustments. Instead, I asked my players to step up their game,” Hogue said. “We wanted to wait for the right opportunity and take advantage of them. We had to grind it out, and we did. Our team handled the ball better. We were more composed and slowed the game down.”

In the second half, Cathedral started to dominate the game and kept the ball in the attacking half of the field. It took a moment of brilliance from Fondren to get the attack going for Cathedral.

He controlled a pass outside the box and curled a ball on goal. At first, the shot looked like it was going over the crossbar. At the last second, it dipped into the goal, Hogue said.

Moore scored the third goal of the contest as he dribbled through four or five defenders before he fouled from behind inside the penalty box. Moore stepped up to the spot and slotted home his penalty kick.

With a comfortable hold on the game, the Green Wave put in some younger players to get more experience. Before the end of the game, Fondren scored the last goal needed for his hattrick. He fired a low and hard shot straight, and it slipped underneath the goalkeeper for the fourth and final goal of the game.

“It was a true worm burner. I don’t think it ever got off the grass,” Hogue said. “It was a weird game. It never felt like a free-flowing game. It was sporadic…I’m proud of the way we battled. It could have gone south easily.”