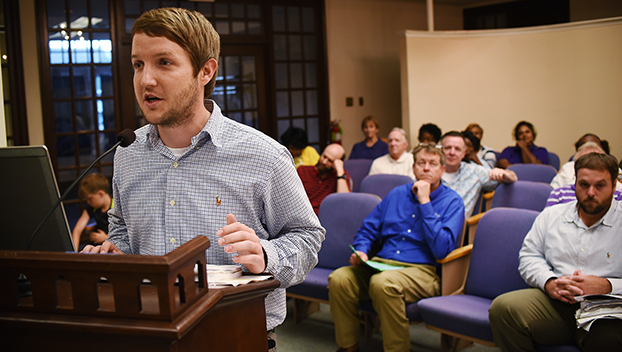 NATCHEZ — Natchez City Planner Riccardo Giani is leaving Natchez for Charleston, S.C., where he plans to take a job in the private sector.

“It’s the definition of bittersweet,” Giani said. “This was my first planning job. I owe this city everything.”

Giani started working with the City of Natchez as a contractor in March 2014.

“I started working in Natchez under Butch Brown,” he said.

He will become senior planning associate for a company located in downtown Charleston.

“I will work more on the consultant side, helping municipalities with projects,” Giani said.

Originally from The Woodlands, Texas, Giani said the people he has worked with in Natchez have prepared him for the next step in his career.

“The people — the professionals — I work with, the department heads, the city hall staff, helped me grow into the person I am and helped me be able to go to the next level,” Giani said. “I could not have done it without Natchez. The preservation commission members have taught me so much. Mimi Miller and Carter Burns — I have learned so much from them about historic preservation. That’s another tool in my tool belt now. Ex-planners, ex-attorneys, ex-engineers sit on the planning commission. I have learned so much from them.

“Natchez is in a really good place right now. I can only hope it continues to grow. People of this city deserve it. Say what you want about small towns, but this may be the best one in America,” he said.