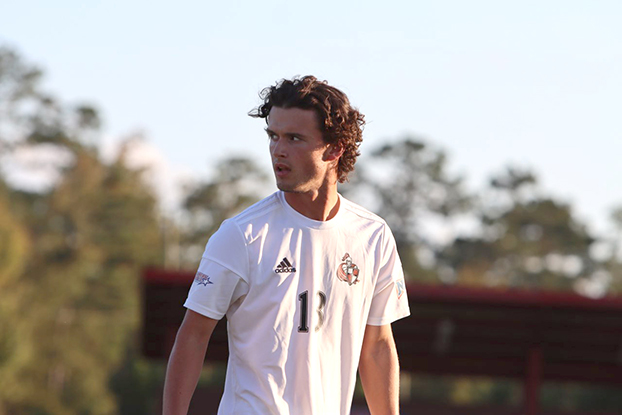 Adams County Christian School alumnus Preston Fuller is a midfielder and defender for William Carey University in Hattiesburg. He finished his first season of soccer and is looking forward to the spring season.

His first season was a learning experience. It was different from high school in multiple ways. It was also the most fun he has ever had playing soccer, he said.

The biggest lesson he learned was how much harder the game gets with each level.

“In high school players are going to give you easy passes. Everything is easier,” Fuller said. “In college, you have to think before you get the ball. Every player is there to play soccer, whereas in high school they might be there to get out of class or just play sports. You have to learn to be patient.”

Another lesson he learned was to take care of his body after games and practices, something he did not do in high school. After practices or games, players are encouraged to get treatment, which entails ice baths and letting the trainer know if they have any discomfort. One device looks like a sleeping bag and can be placed around the leg if there is discomfort, he said.

As much as he loves being on the field 24/7, Fuller said he has to focus on school at the moment but soaks in every moment he has in the game.

“Every minute you have to try and soak it in,” Fuller said. “I’m going to have eight seasons. The first season was to get a feel for things. Our coaches taught me things about the game I never thought of. They tell us every day that our mentality is just as important as where we are physically. I’m excited because it is just the beginning. I feel like I have grown a lot as a player.”

Fuller said he knows he has room to grow, especially in the weight room. Players at the college level are a lot stronger than in high school, he said. In one game, Fuller said he went up for a header and collided with another player. This sent him flying through the air as if he weighed as much as a little kid.  This winter, Fuller plans to improve his strength before taking the pitch in February.

College practices have been some of the most fun Fuller has ever had playing soccer, and why Fuller does not think he could have picked a better college, he said.

His family, now living in West Monroe, moved from Natchez after Fuller graduated from high school. They still talk to him every day. He has also grown closer to his teammates.

“I was worried about that before I came,” Fuller said. “I was wondering if there was going to be good chemistry. It was more than I ever imagined. All of the seniors feel like close teammates. It feels like a family.”