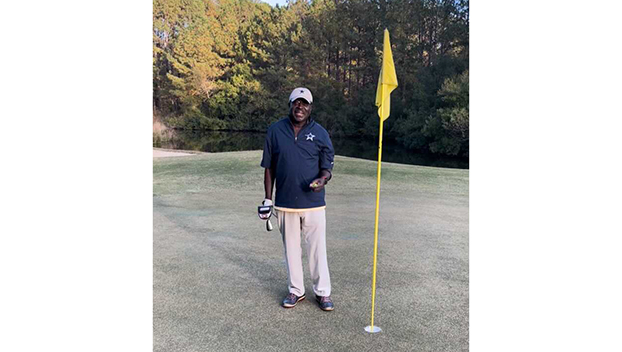 Natchez doctor Koffi Kumi aced his fourth career hole-in-one with a 120 yard shot. He used a gap wedge to make the shot at Beau Pre Country Club. All four of his hole-in-ones were at Beau Pre, he said. Raymond Riley was his witness. (Hunter Cloud | The Natchez Democrat)

Kumi said it was a lucky shot from 120 yards out. His shot selection put him in the best spot to have an under-par hole. With the temperature being a little cool, he knew his gap wedge would lose about 10 yards of range. Typically, he hits the gap wedge 130 yards, so he picked the club to hit 120 yards.

The sun was in his eyes when he hit the ball, he said. As his ball hit the green, Riley told him the ball was three feet from the pin and rolled towards the hole before he lost sight of it. When Riley told him he thought it went in the hole, Kumi said he didn’t believe him. It was not until they got on the green that Kumi realized he had made a hole-in-one, he said.

“I was excited. I was very excited. I have had four hole-in-ones,” Kumi said. “This is my fourth one with a witness. You could give me 5,000 balls right now and I wouldn’t get one in the hole.”

He wasn’t spending his Thursday night celebrating. Instead, he was at home getting ready to watch the football game between the New Orlean Saints and the Dallas Cowboys.

All four of his hole-in-ones have been at Beau Pre Country Club, he said. He had another hole-in-one, but there was not a witness with him that day. According to the Professional Golf Association, the average golfer has a 12,500 to 1 odds of making a hole-in-one. The average golf experience of players who make an ace is 24 years. Kumi started playing golf in 2003 so he has 18 years of experience. Kumi said he used to not like golf but now finds it exciting.

“It is relaxing and keeps your mind off of everything,” Kumi said. “I used to hate golf with a passion until I went to the Bahamas. A friend of mine asked me to play putt-putt golf at Atlantis Resort. I did it. I thought this was challenging and enjoyable. Until then I hated golf. I told people it was too boring.”