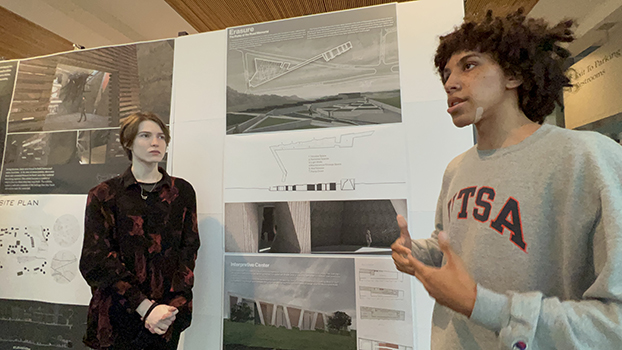 4 Sarah Dawson and Joshua Forney present a design at the Visitor's Center Wednesday on behalf of their group.

NATCHEZ — With only a few signs existing to memorialize the tragic events that took place at Forks of the Road in Natchez, junior and senior-level students of architecture and interior design at the University of Texas at San Antonio helped people realize the site is a far cry from reaching its full potential.

The site was once home to one of the largest slave trade markets in the nation between 1833 and 1863. During that time, families were divided and people were sold into lives of hard labor.

The students have spent approximately three months on a group project mapping and visualizing the kind of memorial and information center that the site deserves.

On Wednesday, they made a site visit to Natchez and presented their work at the Visitor’s Center. Forks of the Road, which was recently designated as a National Park Service site, has been severely under-recognized, they said.

“We spent a whole month having conversations, researching Natchez, Mississippi, and the site itself, talking about American slavery as well as how it affects us today,” said Joshua Forney as he presented his group’s design on Wednesday. “Specifically, we learned that Forks of the Road was such a prominent slave market site. It was a huge part of the south and provided such a huge economic boom. … If you were in the slave trade in the antebellum south, you had to come through Natchez, Mississippi. And yet, none of them heard of Forks of the Road until we were given the project.”

Natchez National Historical Park Superintendent Kathleen Bond said the ideas presented were unlimited in size and budget, allowing the students to come up with a design from the farthest reaches of their imaginations.

Bond said while the designs may never be used in their entirety, they could help developers recognize what the site has the potential to be as the park service goes through the process of acquiring more of the land at forks of the road from private owners.

The students have been developing their designs for a memorial and interpretive center under the direction of Professor Diane Hays, FAIA, and teams of globally recognized architects, Bond said. They were split into teams and together designed buildings, interior spaces, and landscapes for Forks of the Road to honor the enslaved people who were victims of human trafficking at the market.

They worked directly with staff from Natchez National Historical Park to use architectural strategies to reflect emotionally powerful themes of dislocation, oppression, erasure and freedom in their designs, Bond said.

Forney and his group partner Sarah Dawson did this by designing oddly shaped underground tunnels for visitors to walk through meant to create a sense of smallness, discomfort and confinement that the enslaved persons would have felt.

Destiney Bazan said she designed her center at a slant where it would feel as though “your world is collapsing in on you” as you walk through the enslaved person’s journey. Slivers of light from outside shine through in places to symbolize rays of hope.

“We chose the materials of concrete and steel because they’re so heavy and honest and it’s not pretty because history is not pretty,” Bazan said.

Sierra Laird said, as an African American woman, it touched her emotionally as she discovered more about her ancestral history and searched for ways to tell their story to the world.

“This project means a lot to us,” Laird said. “It was personal to me.”

The designs of different student groups were presented at the Visitor Center Wednesday and will be displayed there through the end of December, Bond said.