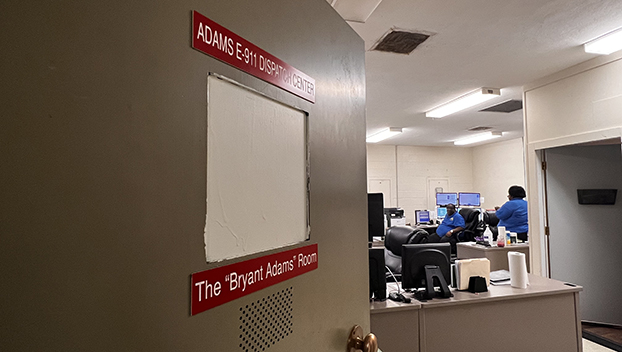 NATCHEZ — City of Natchez and Adams County officials are considering a reformation of E-911 services after the head of the department expressed concerns over work conditions.

Adams County Board of Supervisors attorney Scott Slover said city officials had “communicated their desire” for taking back ownership of the city’s E-911 operation in a jointly held meeting with county officials last month. Slover said they also discussed moving the E-911 operation to a new location and are now taking steps to determine what it would cost.

The E-911 department sits in the basement of the Adams County Jail. It has been housed there since the department was consolidated with the city and county in 2017.

After the supervisors’ meeting, Mayor Dan Gibson said he and Alderwoman Valencia Hall had met informally with a couple of supervisors at the request of Natchez Police Chief Joseph Daughtry between two and three weeks ago about E-911.  Gibson said no final decisions had been made during that meeting.

“It’s too early to say what would happen,” Gibson said. “We want to see that (E-911) is efficiently and adequately provided and we could look at a better way to do it at a lesser cost to our taxpayers and still leave it as a combined service (between the city and the county). We will know soon. We are crunching numbers and will likely by next week have something for each board to consider.”

Last month, E-911 Dispatch Director Annette Fells told supervisors about the department’s high turnover rate and issues hiring new people. Fells blamed the low pay rate and the work environment for these issues. She said the ceiling sometimes leaked with raw sewage from the inmate’s bathrooms. She added any commotion from the upstairs jail could be heard loud and clear where her employees spend 12 hours of their day.

At the time, the Board of Supervisors delayed taking action until they could discuss the issue with the city.

In other matters during Monday’s meeting, the board: