McComb sweeps Natchez on the court 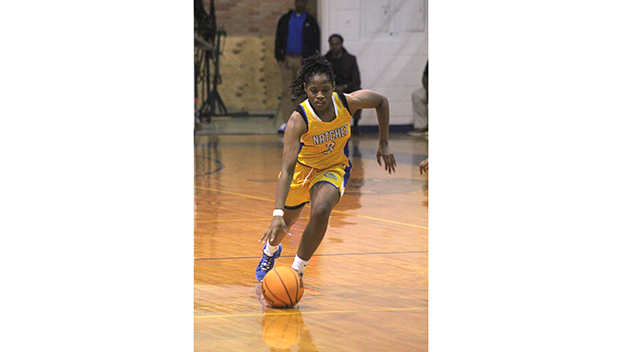 MCCOMB — The Natchez High School Bulldogs struggled to make shots from the field and that proved to be the difference as they lost to the McComb High School Tigers 52-41 last Tuesday night.

Natchez High head coach David Haywood said had his team gotten more of its shots to fall, especially in the first half, the outcome of the game would have been different.

“We had all the opportunities to win this game. We just struggled to make shots consistently throughout the game,” Haywood said. “We just didn’t make shots early (in the game).”

The Bulldogs were unable to reach double-digit scoring in both the first and second quarters. They trailed McComb 12-7 after one quarter of play and then were limited to eight points in the second quarter. The Tigers took a 25-15 lead into halftime.

Haywood said that the pace of the game was good and that the Bulldogs played okay on defense. But the inability to get shots to fall, whether it be near the basket or wide-open jumpers, proved to be the key factor.

“We had a few unforced turnovers, but we just couldn’t make enough shots,” Haywood said.

McComb added to its lead as it put up 17 points in the third quarter while Natchez High had 13 points, giving the Tigers a 42-28 advantage. Even though the Bulldogs outscored the Tigers 13-10 in the fourth quarter, the 14-point deficit heading into the quarter was too big to overcome.

“It was a close game all the way through,” Lady Bulldogs head coach Alphaka Moore said. “We struggled from the free-throw line. I think that had a major impact on the game. We’re just moving forward and taking it day by day and just focusing on getting better.”

Natchez High was just 7-for15 from the line, but McComb was even worse, making just three of 11 from the charity stripe.

The Lady Bulldogs led the Lady Tigers 6-5 at the end of the first quarter, but McComb outscored Natchez High 11-8 in the second quarter for a 16-14 halftime lead. Natchez High scored nine points to McComb’s five points in the third quarter to take its two-point lead before the Lady Tigers went on.a tear in the fourth quarter.

The Lady Bulldogs were led by Mercedes Sewell and Jaliyah Wright with seven points each. Nyla Poole chipped in with six points.

Defense and rebounding were too big factors for the Lady Tigers in the win. As a team, they pulled down 41 rebounds with 18 of them on the offensive end and blocked 11 shots to offset being called for 20 total fouls and committing 29 turnovers.