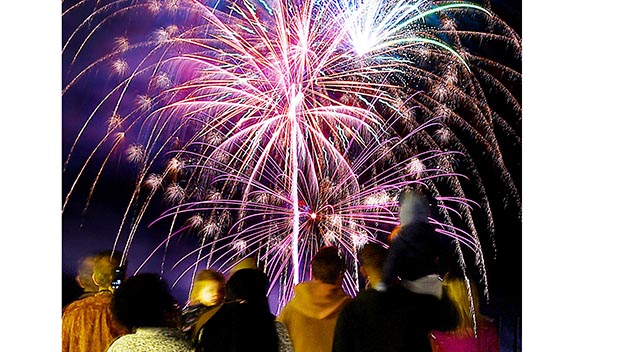 Fireworks over the Mississippi River.(Ben Hillyer / The Natchez Democrat)

NATCHEZ — Miss-Lou residents can look forward to closing out 2021 with a spectacular bang during the annual New Year’s Eve Fireworks on the River.

Sabrina Dore, who is part of the non-profit group Miss Lou Fireworks, has worked since 2016 to make certain the fireworks show goes on.

“In 2015, we didn’t have a New Year’s eve fireworks show,” Dore said. “Well, we couldn’t have that, so in 2016 myself and a group of individuals — just regular people like me — bought lots of large fireworks and went to the river and set them off.”

After that, Dore sought permission from the woman who had been leading the fireworks shows on the river to take them over. The woman gladly handed over the responsibilities to Dore. She had been doing it a number of years and getting sponsorships to cover the costs was becoming more and more difficult.

“I told her, ‘I’ll take a turn,’ ” Dore said. And the non-profit Miss Lou Fireworks was born.

Miss Lou Fireworks is a little short of the funds needed to cover the costs of this year’s show, and new sponsors are needed right now.

“The cost of the fireworks show is $10,000 for the fireworks, $1,500 for the barge service and $100 for the permit. As a non profit, all money to pay for the show is gathered through sponsorships and we are currently a little bit shy,” Dore said.

Those interested in helping sponsor the fireworks show can visit MissLouFireworks.com and click on Become a Sponsor at the top of the page.

“Every business in the Miss Lou really benefits from this show, especially those businesses in the downtown Natchez area. It’s something we all look forward to,” she said.

Sponsorships range from $2,500 for a platinum sponsor to $100 community sponsors.

“Last year, the senior class of one of the schools couldn’t have a prom because of COVID, so they chose to use those funds by becoming a community sponsor of the fireworks show,” Dore said.

Should any funds be received after the cost of this year’s show is covered, will go to help fund next year’s fireworks show.

“We are going to begin the show at 6:30 p.m. because it’s a family event. We would like all families and children to be safely tucked in at home after experiencing this great fireworks show to end the year,” she said. “Our police officers help us tremendously, but on New Year’s Eve, they are extra busy, so we want to get the fireworks show done and let them move on to other things.”

Dore said the fireworks over the river have received some grand praise in the past and she hopes this New Year’s Eve show will be one of the best.

“We even got word from Hank Williams Jr. after the July 4 fireworks show that it was one of the best ones he had ever seen. That made me proud that this community could come together and put together a fireworks show like that. Hearing someone like that say it was ‘beautiful, glorious, that it was glittering all over the river,’ really makes me proud.”