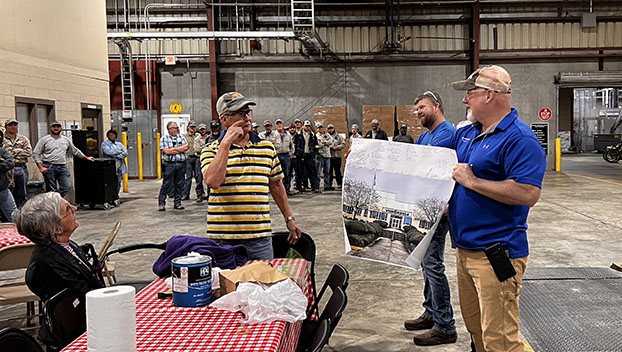 NATCHEZ — On Thursday, von Drehle Corporation in Natchez celebrated the upcoming retirement of David Webb with a surprise party held in his honor.

Webb’s official last day is Dec. 30, on the 55th anniversary of his starting work at a manufacturing company where von Drehle is today.

Even as he retires, Webb said the mill still holds a special meaning to him, and the people he worked with are like family.

“This place will always mean—I can’t even express what it means,” he said. “I’m not retiring because I don’t love to work here. I’m just getting to that age now. I love this mill and I love everybody that is in here.”

“He keeps the paint new and things clean and looking nice,” said Jim Ball, maintenance manager at von Drehle. However, Webb has had other jobs in operations back when it was Mississippi River Corporation and earlier, Ball said.

“I ran all the machines at Diamond,” Webb said. “I was the best, or I tried to be the best that I could be.”

“He is a nervous wreck every time they play, regardless of whether the other team is good or bad,” he said. “When the win, he comes to work with all LSU attire. … He also does a great Elvis impression. He is a good person and we’re going to miss him. He gives his all every day.”

Ball said Webb makes it known how much he loves the mill and everyone there.

“He is the most positive and upbeat person I’ve ever known.”

Kot Morris, the administrative specialist at von Drehle, added Webb always puts others before himself.

“He has battled a lot of cancer but will still wake up and come to work every morning wanting to know how you’re doing,” she said. “He is a fine, fine man.”

Webb’s friends at Von Drehle left him a few parting gifts on Thursday: a poster of the front of the mill signed by his friends and co-workers with their well-wishes, an LSU pullover jacket and a can of yellow paint, “to paint the stripes on his driveway,” Ball said teasingly. They also invited Webb’s wife of more than 40 years, Debbie, to the retirement party on Thursday to surprise him.

When asked what he plans to do when he retires, Webb said, “I might start with doing a little painting around the house.”