Up to the task: Rick Simons takes over as interim coach 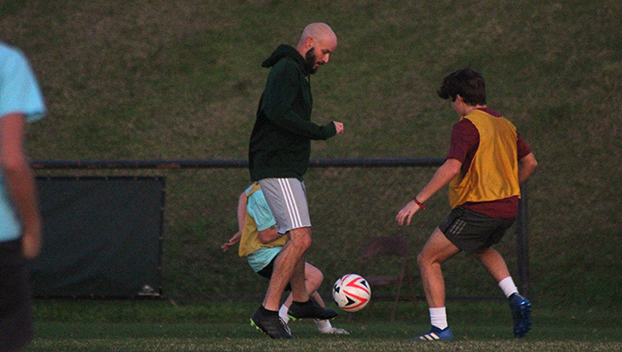 Cathedral interim head coach Rick Simons stays active in practices. Typically, head coach Dennis Hogue and Simons like to get hands on and play in the scrimmaging half of practices. (Hunter Cloud | The Natchez Democrat)

That’s because Hogue was at home recovering from an injury sustained in a friendly soccer scrimmage with Natchez High School played on Sunday. Typically, he spends his Sundays playing soccer with a group of guys. On occasion, they will scrimmage Cathedral, ACCS or Natchez in soccer.

Interim head coach Rick Simons was playing alongside Hogue when a Natchez player came out of nowhere and tried to make a tackle on the ball, inadvertently striking Hogues right knee from the side. The force dislocated his patella, commonly known as the kneecap.

“It was a scary moment,” Simons said. “I thought it was a broken leg. The way he was laying there, it reminded me of a broken leg… I’m glad he is doing better than what we anticipated.”

Hogue had an MRI scan Thursday. He said he expects to have a simple outpatient surgery and six weeks of recovery. Until his return, the team is in the hands of Simons who has been a coach at Cathedral for the last 16 years.

He served as an assistant under Paul Burns until he became a head coach in 2008. After opening a business in 2011, he couldn’t devote as much time as he needed to and stepped down from the head coaching position. Hogue asked him to stay on as an assistant coach.

“It was one of those things where if you don’t use it you lose it,” Simons said. “We make a good team coaching together.”

Hogue said their plan is to discuss strategy, positioning, game planning and practice sessions like they do everyday. The only difference in the team’s preparation is Hogue will not be involved in practices until his knee is fully healed.

“We always jump in,” he said. “We like to play in the second half of our practices. Hogue will continue to help with the scheming until he returns.”

Hogue said he should return to the sidelines by New Years. Cathedral plays its first district match at Copiah Academy on Dec. 16.  Kickoff is at 5:30 p.m.