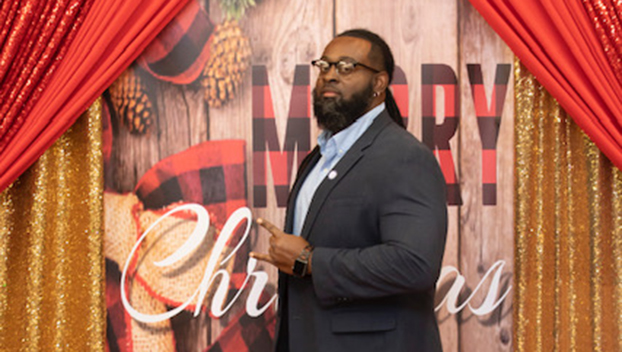 Thomas is a 1997 graduate of Natchez High School in Natchez. He attended Alcorn State University and received a Bachelor of Science Degree in General Studies in 2001 and a Master’s of Science Degree in Secondary Education with endorsements in Health and Physical Education in 2004.
Currently, Thomas teaches Health and Physical Education. He is also Head Track Coach for the Jefferson County High School Track and Field Team.  As a coach, he has led teams to the following accolades:

Thomas is a member of the Alpha Iota Sigma Chapter of Phi Beta Sigma Fraternity Incorporated, where he has served as Vice President.  He is the proud father of two amazing boys, Joshua “Kash” Thomas, age 18, and Avery C. Thomas, age 10.

“They are most definitely the greatest thing to ever happen to me beyond the shadow of a doubt,” Thomas said.
Thomas loves to sing, work out, and spend time with his family in his spare time.  He believes having good character and genuine respect for people are the real keys to success.

“If we work together as a team, anything is possible when it comes to educating our students. Teamwork makes the dream work,” he said.
“Mr. Thomas has served the Jefferson County School District for many years in the capacity of a teacher and coach,” said principal Cashoney Carter.  “His accolades are a testament to his dedication and passion for our students.  He is a person of many talents and exemplifies excellent leadership qualities in all aspects of his career.  Mr. Thomas is empowered by the growth and success of both the students and the school.  His relentless work ethic and unwavering noble character have truly earned him the distinguished title as Jefferson County Upper Elementary School’s Teacher of the Year.”