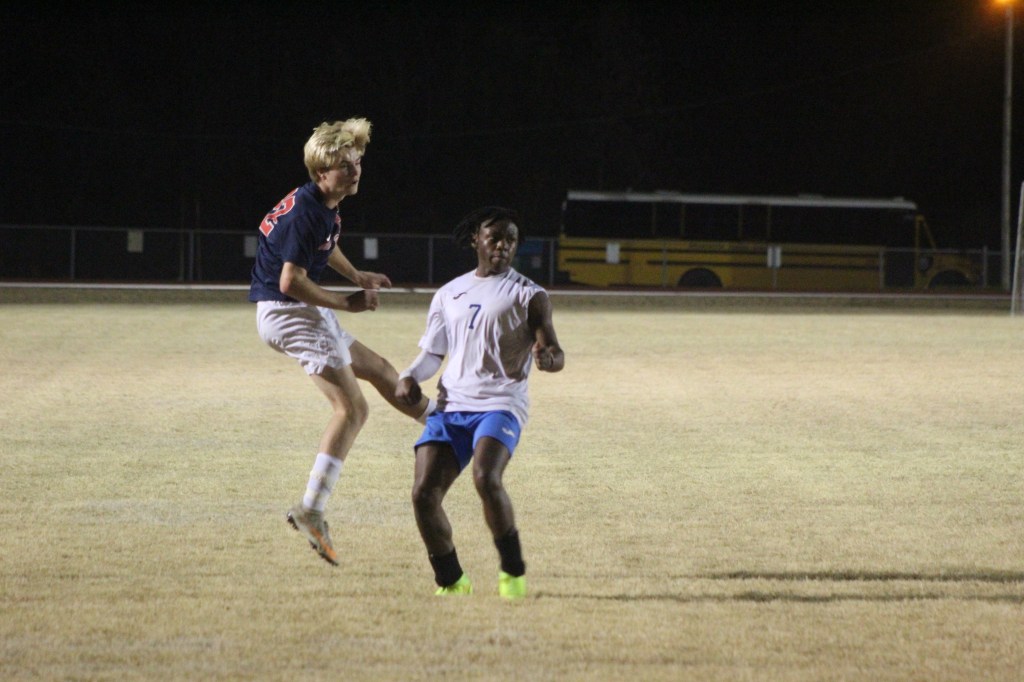 Brookhaven forward Cole Cruthirds fires a shot on goal. He would score a goal in the Panthers' 7-0 win over Natchez Tuesday night. Ole Brook's Lady Panthers won by the same scoreline 7-0. (Hunter Cloud | The Natchez Democrat)

NATCHEZ — Brookhaven senior forward Addison Brady found some space with the ball at his feet and cannoned a shot on target. Natchez’s goalkeeper jumped to his right with outstretched gloves, but he could not save the strike as it hit the top corner of the goal to open the scoring Tuesday night.

Ole Brook’s boy’s soccer team got off to a great start in their match against Natchez. They never looked back and scored seven goals to win 7-0. Head coach Aaron Ayers said the early goal helped.

“A lot of the times in the past, we missed those early shots,” Ayers said. “Tonight, it felt like everything was clicking. Natchez’s goalkeeper made some good saves, but we put the ball in places he could not reach.”

Clinical finishes from Ashton Ogletree, Ethen Lopez, Bryce Bradley, Cole Cruthirds, Michael Stewart and Christian Peyton accounted for the other six goals. Brookhaven had seven players score a goal in the match, which was great to see, Ayers said.

Natchez plays an aggressive style of soccer where players overcommit to the ball. This allows teams to capitalize on any missed tackles and out-of-placed defenders.

Brookhaven accounted for the overcommitment and aggressive defending in their game plan. The Panthers used the Bulldog’s tendencies to create opportunities.

“It really opened up the passing lanes for us,” Ayers said. “We had better communication tonight, and we saw the field better. We found the open man. We tried to play off each other. Last game, we tried to do too much.”

Natchez head coach Josh West said his team is showing some progress. They need to develop their tactical understanding of the game, and they need to learn how the game flows, he said. A lot of his players showed effort in the game.

Darius “Squirrel” Williams showed the best hustle out of any player on the field. His lighting speed, constant motor, and determination to win the ball and create opportunities had coaches and teammates yell ‘let’s go squirrel’ throughout the game.

“He is a defensive player on the football team. I started teaching him in sixth grade. He was full of energy,” West said. “I asked him to play soccer, and he didn’t blink twice. I’m proud of him…Right now, with this team, we have to play to our strengths which are speed and athleticism.”

West played soccer at Natchez when he was in school and won a few district championships. He is now in his third year coaching the boy’s and girls’ teams.

The Lady Bulldogs suffered the same fate against Brookhaven. They lost 7-0 to the Lady Panthers Tuesday night.

Natchez goalkeeper Dyamond Dee made several saves to help her team. West said the team is getting better at passing and defending.

“With the girls, you see the progress at practice in our drills. We just need it in the game,” West said. “We have to apply it in the game.”

Brookhaven brought its entire girls squad and started the girls’ game with all 7th graders. Lady Panther’s head coach Dustin Bairfield said everyone got experience at the varsity level.

Natchez presented a challenge as a physical and aggressive team. Ole Brook focused on improving passing and how to control possession in the game, he said. They also learned how to handle an overly physical team.

“In soccer, it is a physical game. I think it was good for the younger kids to experience it.” Brairfield said. “As a coach, I see when they play a more aggressive team sometimes, they lose some of the focal points of the basics. I reminded them at halftime, ‘We are here to play soccer.’ I’m trying to get them to understand the tempo of the game. You have to slow the game down and let your players get back on track when you play a physical team like Natchez.”