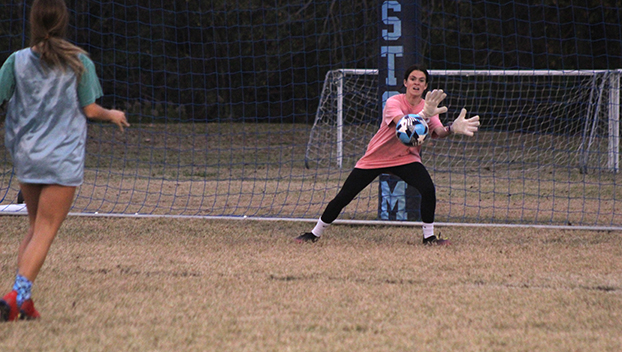 Delta Charter goalkeeper Addie Johnson made 15 saves against Tioga who was #2 in their district before playing the Storm. She is a freshman and is in her second year of soccer. (Hunter Cloud | The Natchez Democrat)

FERRIDAY — The Lady Storm beat Tioga 3-1 as Chloe Smith, Cailey Geohagan and Sydney Sharp scored goals. Head coach Christal McGlothin said she was thrilled with her team’s performance Friday night. Her goalie came so close to a clean sheet in the game but got one in their 8-0 win over Bolton Monday night.

In practice, they worked on creating opportunities leading up to the match. Her forwards and midfielders did just that as they created opportunities where the Storm were not shooting right at the keeper.

“Everything we worked on in practice, they implemented perfectly,” McGlothin said. “They connected passes so well and that is something we usually struggle with. Tioga has a pretty good team.”

Goalkeeper Addie Johnson had an outstanding game as she made 15 saves for the Storm. It is her second year playing soccer with Delta Charter. Storm alumnae Shyvlie Blaney coached Johnson in her senior season. Blaney was the starting goalkeeper at the time, Johnson said.

Her friend told her to play soccer, she said she thought the friend was joking but she ended up liking the sport. Its aggressive, fast paced nature is appealing to the freshman who has a lot of energy. While she did not play much last season, she spent a lot of time working to get better. In the school’s offseason, she plays club and league soccer to get better as a goalie.

When she is in goal, she said a lot of different things go through her mind.

“It depends on the game. If we aren’t playing a good team and are controlling the game I want them to come into my half because I get bored,” Johnson said. “If a team is on our side of the field I tell myself everything I need to do. Like if the ball is going toward the corner I need to dive or if the ball is in the box I have to slide.”

She said twice this year she made a sliding save on an advancing attacker and threw a girl over her shoulder to avoid being hit in the face. In the moment, she said it is not scary because all she can think about is making the stop.

Her biggest goal this season is not to keep a certain amount of clean sheets or make 20 saves in a game. She just wants to make a save on a penalty kick in a game.

At practices, her team will sometimes line up and take penalty kick after penalty kick to give her repetition. In the game, she looks where a player is standing before they kick the ball to determine which way to dive, she said.

Her match against Tioga it felt like she made a lot of saves throughout the game. They were constantly taking shots, she said. 15 of those shots did not get in the goal but one did find the back of the net.

“It really makes me mad. That shot would have been hard to get though,” Johnson said. “When they scored I took it out on myself. I try to stay positive on the outside but in my head I’m just thinking they really just scored.’ It kills me when they score.”