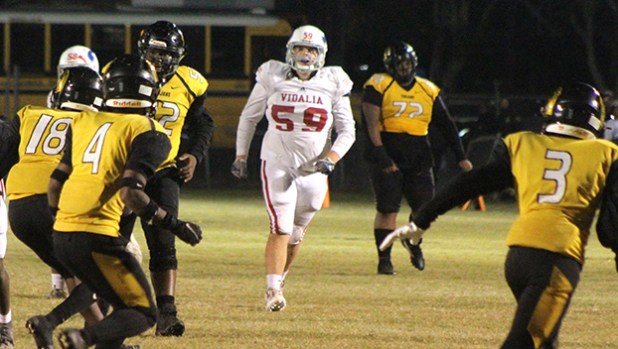 Gabe Bourke is a senior offensive lineman for Vidalia. He will play in the Blue-Grey All-American bowl held in Dallas on Dec. 20. 10 days after that he will block for his teammate and fellow allstar Nick Banks in the Louisiana Gridiron All-Star game on Dec. 30 in Hammond, Louisiana. (Hunter Cloud | The Natchez Democrat) 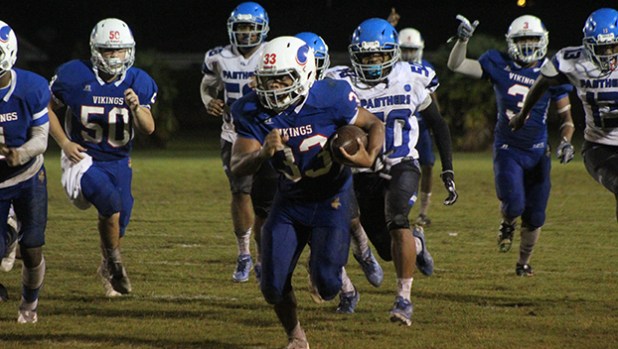 Nick Banks is a senior running back for Vidalia. He will have one more game to play with his close friend and teammate Gabe Bourke on Dec. 30 when he plays in the Louisiana Gridiron All-Star game in Hammond, Louisiana. (Hunter Cloud | The Natchez Democrat)

Offensive lineman Bourke was selected to play in the Blue-Grey All-American Bowl held in Dallas on Dec. 20. A senior, Bourke has played football since he was in first grade, he said.

As a kid, his dreams were to one day play college football. His favorite NFL team is the Dallas Cowboys. He will have an opportunity to play in their stadium, on their field with and hopefully the opportunity to catch the eyes of a college scout.

“It is pretty exciting. I get to play in the biggest stadium of my life,” Bourke said. “It is one of the nicest stadiums out there. I haven’t gotten any college offers yet but there will be scouts at this game and I hope I get enough attention.”

His mom Stephanie Bourke told him he made the team by sending him a picture. He said it came as a surprise because he did not know he was in the consideration for the game.

Banks and Bourke learned they were selected for the Louisiana Gridiron All Star Football Game via a text from their head coach Mike Norris. The game will be played Dec. 30 in Hammond.

“It is exciting to go to an all-star game with a teammate. We have played together for a while now. We will be playing on the same team,” Bourke said. “I’m looking forward to getting to play and practice against new guys. I look forward to new coaches and playing at new places with these all-star games.”

This season, Nick Banks, a senior running back, was crucial to the rushing attack for Vidalia. His toughness and warrior spirit were the highlight in Vidalia’s toughest defeats. He said being selected to play alongside he teammate and close friend is a big step in life for the Vikings and others competing in the game.

“For us to play in this event it gives us opportunities for us to show what we got on the field,” Banks said. “I never thought I would make it so far to come this point to play with and against the top 120 players in Louisiana.”