Green Wave out rebounded in loss to Flashes 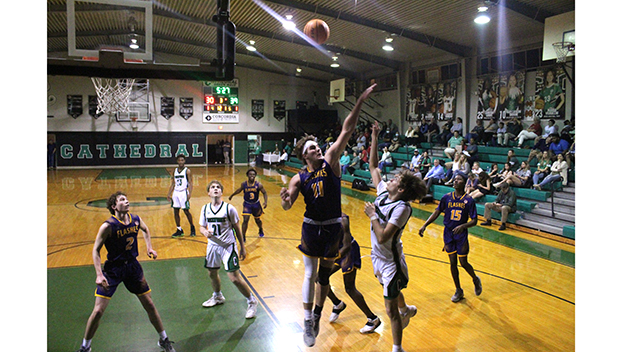 NATCHEZ — St. Aloysius beat Cathedral 58-56 Friday night as they blocked a final desperation heave as time expired. The Flashes escaped Natchez with a win after the Green Wave clawed its way into the game.

Cathedral trailed by just two points with about 30 seconds to go in the game and had a few chances to tie the game but could not make the short-range shots. Head coach Taylor Strahan said a failure to rebound the ball and make free throws cost them the game down the stretch.

“We couldn’t shoot free throws, and we refused to block out. It’s as simple as I can put it,” Strahan said. “Every game this year has come down to those two things. We get outrebounded every night. Until it changes, the results won’t change.”

His team has to have effort to rebound and shoot free throws better. Effort is something not taught in practice, and it is not something people have to have talents to have, he said.
In their upcoming tournament, he hopes to see an improvement in his team’s effort. Cathedral will play Monday and Tuesday before the Christmas Break.

“You hope guys come out and play with enough effort and refuse to lose,” Strahan said. “We aren’t going to wake up and be 6 foot five inches. Everyone can block out and make free throws. Everyone can step up.”

Cathedral was without a key player in the rivalry game. Senior Christian Wright rolled his ankle this week and did not dress out. His crutches were on top of the seats beside him as he watched the game.

Strahan said it is tough anytime they lose a player to injury because of the size and depth of his team.

“He is our only senior. He is our best ball handler and athlete,” Strahan said. “Not having him made a huge difference.”