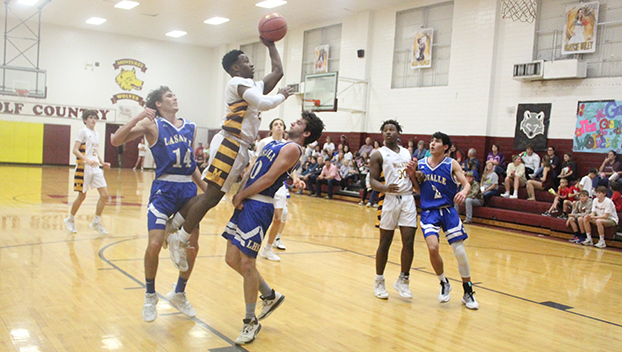 Head Coach Eric Richard said he splits the season into three parts. The first is from opening day to Thanksgiving break, the second is a gauntlet of games from Thanksgiving to Christmas Break and the final stretch is district and playoffs.

The Lady Wolves are 11-6 at this point in the season with two of their losses against LaSalle. Monterey made sure they would not be beaten a third time as they outpaced the Tigers in the second half out scoring them 29-20. Addy LaCaze said the early losses motivated them.

“We have lost to them twice, so it was nice to get them back,” LaCaze said. “I guess it was personal. It is one of those teams we always like to beat.”

At halftime, Monterey led by just one point and had to make some adjustments in the second half. Richard said his team did a better job of guarding the Lady Tigers two best shooters. The win was not as much about x’s and o’s, but the fact the Wolves were able to knock down shots when they needed to, he said.

Monterey got some help from its home court advantage as the game’s momentum began to shift in the Wolves favor in the second half. On one possession LaCaze intercepted a pass and scored a layup to a fever pitch applause.

“It’s really exciting when everyone starts yelling,” LaCaze said. “We have to calm down a little bit.”

Fans chanted Mighty Wolves as LaSalle passed the ball around the perimeter to kill the clock. Lady Tigers were down by 14 points with 1:40 left. Richard said he had never seen anything like it.

Monterey’s boys came into the game a little flat but they executed well enough to win. Junior Phillip Atkins led the scoring charge with 14 points for the Wolves. He said in warmups he felt good. 12 of his points came from three-pointers.

“It was just clicking. The hoop gets bigger when I shoot like that,” Atkins said. “Mentally in my head the hoop gets bigger. We are playing consistent basketball but we have a long way to go. We aren’t satisfied.”

Richard’s boys comfortably led the entire game against LaSalle. In the fourth quarter, some younger players were able to come off the bench and get valuable playing time at the varsity level.

This also gave some rest to Monterey’s starters. Early in the game, their energy and body language was off but they have also played 11 games in the last 17 days. The 25 point win gave the Wolves a clean sweep of LaSalle and they capped off a seven game win streak before Christmas break.

“I know those guys are gassed,” Richard said. “I’m proud of them. If the people saw them play in June, it is night and day. I’m proud of the progress they have made.”