The Dart: Natchez business owner goes all out for Christmas 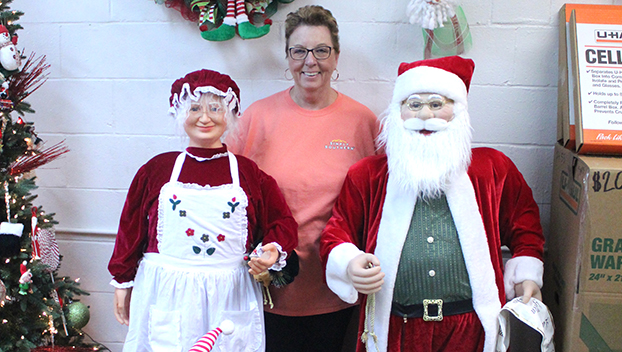 NATCHEZ — From the gravel parking lot at Natchez Business Solutions, four Santa Clauses and fake snow can be seen on a window sill. Walking through the front door of the building on 146 North Shields Lane close to where The Dart landed Thursday, Christmas decorations are everywhere.

In the main hallway, fairy lights blink on and off; a Santa Claus climbs up a gold string to music, snowflakes; and Christmas ornaments hang from the ceilings. The lobby hosts business owner Christine Irvin’s Santa Claus collection, which tops 100.

Her friend Sybil Magee and her sister Liz Davis helped decorate the office, Irvin said. It took about a month for the crew to put up everything as they had to hang red and gold baubles one at a time from the ceiling.

“We started small and it kept growing the more I took out of the box,” Irvin said. “Customers will say ‘it is beautiful,’ and ‘y’all have done great,’ They will bring their grandchildren to see it … To me the most important thing is the customer, I want to provide good customer service and experience.”

Irvin’s customer service will go as far as ordering the lights which flash in the hallway for customers if they want them. One customer remarked it looked like a “flashing disco.”

A native of Woodville, Irvin graduated from Wilkinson County Christian Academy and moved to Natchez for her job with the postal service. She worked in Washington where she was the postmaster for 20 years, she said.

About two years ago, she bought the building that houses Natchez Business Solutions from a friend. She enjoys helping the customer in the logistics and shipping industry. Decorating for Christmas is one way she brings joy to others.

To the left of the main lobby is a Gift Shoppe she is trying to open for customers. Her hope is to sell Mardi Gras beads so people can buy them in bulk.

Last year, she went all out for Christmas by dressing as the Grinch with a Santa Claus outside. This year, she loaned her Grinch costume to Vidalia Lower Elementary but plans to have music next week. Several of the big Santa’s in the office sing, she said.

Her collection of Santa Clauses began 40 years ago.

“When I was a child we had a Santa on top of the tree. My parents always hung him up there like a star,” Irvin said. “I was fascinated with the fact he was jolly. It was my ornament to collect. If I go somewhere and see a Santa I like, I’ll end up buying it.”

Her most prized Santa sits on her desk and was purchased from the Biltmore Estate in Asheville, North Carolina. A giant glass display case in a corner of the lobby features an army of Santa Clauses and three lego christmas houses she put together. They are from 1999, 2020 and 2021.

At some point she will put together a lego Christmas Village, she said. Her other addition to her display would be a turntable so people could see the inside of the Christmas homes. One has a light up Christmas tree and another has a fireplace which lights up.

She points to a sign which states “Jesus is the reason for the season,” and says “We can’t forget He is what Christmas is about.”