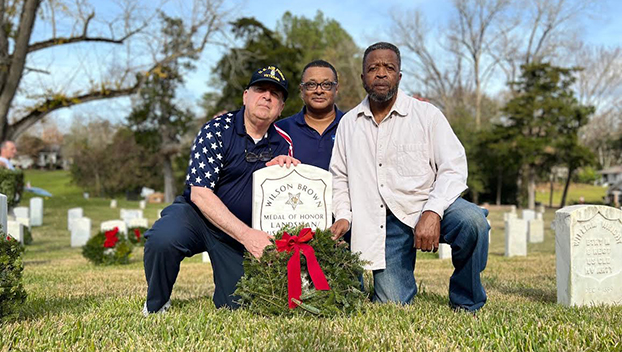 NATCHEZ — On Saturday, Natchez U.S. Colored Troops were among the 2.4 million servicemen across the United States that were honored recently by volunteers with Wreaths Across America.

The presentation was a first for the Civil War servicemen.

Volunteers laid wreaths on their graves and on the graves of U.S. Soldiers marked “Unknown.”

The effort was coordinated locally by the Home With Heroes Foundation. According to G. Mark LaFrancis, the Foundation’s president, the recognition was a first for the African American men who served with six regiments at Fort McPherson in Natchez, during the Civil War.

“For the first time we decided to honor the Unknown U.S. Soldiers and U.S. Colored Troops,” LaFrancis said. “We figured it was very important that the public know that these folks also served our country honorably and bravely, and until now, no one specifically had designated wreaths for them. But we’ve done it. It’s our first time, and we will continue to do it.”

LaFrancis and Pernell, along with several volunteers, laid wreaths on the service member’s graves that are located at the Natchez National Cemetery, 41 Cemetery Road, in Natchez, Miss. They gave special recognition to Civil War Navy Landsman Wilson Brown (1841-1900), a Medal of Honor recipient.

Pernell said he was pleased to see the honor extended to the U.S. Colored Troops.

“This honor for these brave men is well-deserved and long overdue,” he said. “Now that we are remembering them by laying wreaths on their graves, we plan to continue doing this each year. These soldiers played a major role in the Civil War, and their contributions to our nation must not be forgotten.”

Pernell said he was happy the Natchez USCT Monument Committee participated in the day’s ceremony.