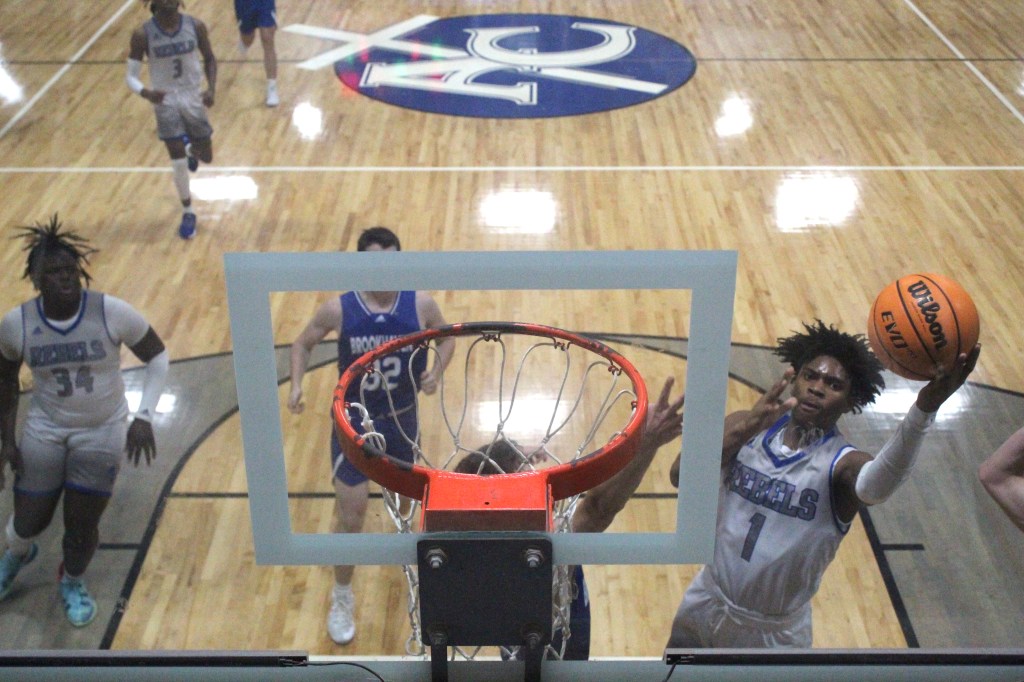 ACCS’s Tiqi Griffin goes for a layup against Brookhaven Academy. He scored 13 points in the 53-20 win Saturday evening. He would score 20 points to help the Rebels beat Oak Forest 50-43 Monday afternoon. (Hunter Cloud | The Natchez Democrat)

NATCHEZ — Adams County Christian School had some players step up and make shots in the third quarter to spark a rally against Oak Forest, head coach Matthew Freeman said. AC won 50-43 as Tiqi Griffin scored 20 of those points Monday afternoon.

“They are a well-coached team,” Freeman said. “When our outside shots were not falling, we couldn’t move the ball quick enough to create easy buckets.”

It would take an offensive spark and defensive play to change the tide for the Rebels. Early the fourth quarter, Griffin drilled a three-pointer with a defender in his face about four yards from the three-point line.

The shot brought the crowd to its feet, and then a couple of defensive plays had the bench players chanting and the crowd cheering growing louder. Momentum began to shift, and the Rebels regained control of the game.

“I stepped up to the plate and made the shots we needed,” Griffin said. “We worked hard as a team to get the win. If we keep going the way we are going, it will be a long, fun ride. When I hit the shot, I felt the momentum change.”

A senior, Griffin thinks of himself as a leader. His role on the team is to push them forward to get the team in a good position to win. He wants to make key shots and defensive plays, he said.

Freeman said Griffin is one of the best players he has ever coached. Over time, he has learned to pass the ball to his teammates, which helps open up the court and create good ball movement.

Edarius “Big E” Green is the workhorse for the Rebels in the paint. A towering lineman in football, he is a hard center for teams to match up with beneath the basket.

“Big E is improving a lot. If he can make his first shot, he will be in business,” Freeman said. “When he is going, he is hard to stop down low.”

Freeman said AC has room to grow and could be better at shooting free throws. The Rebels are off for Christmas but will return to action on January 4th against Copiah Academy.

Griffin said the team plans to put the time in the gym until their next game. He said they spent a lot of time in the gym this summer. It is why they have played so well to start the season.