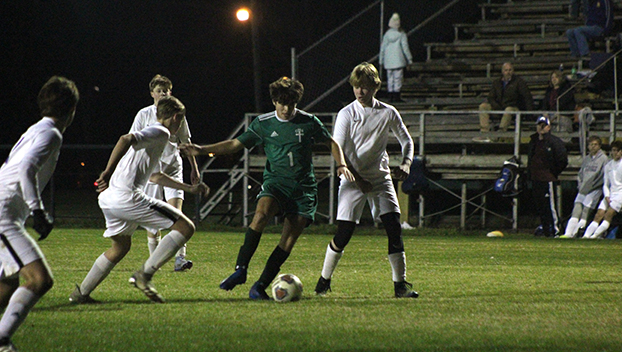 Jacob Moore takes on defenders in the first half of a game against St. Aloysius Tuesday evening. Moore scored two goals in the game. The Green Wave lost 6-3. (Hunter Cloud | The Natchez Democrat)

NATCHEZ — St. Aloysius and Cathedral combined for six goals in the second half of their soccer match Tuesday evening. It was a helter-skelter, throw everything forward half as both teams went for the win.

In the end, the Flashes scored three goals in the final 15 minutes to win 6-3 as the Green Wave committed too many men forward and got caught out of position.

St. Aloysius opened up the scoring with a goal at the 20-minute mark of the first half. Cathedral would respond with 12 minutes left as John Carter Austin created space to fire a shot low at the keeper.

“It was an off shot. If I had taken it on my first touch, I wouldn’t have scored,” Austin said. “It gave us a good boost to end the half. It is the best game we have played all season.”

His goal sparked a flurry of chances to finish the half. Jacob Moore came close to giving the Green Wave the lead, but his shot curled just wide of the far post. Half a minute later, St. Al had taken the lead with a minute and a half left in the game.

He said they did not take advantage of the opportunities in the first half, and it cost them. At halftime, their coaches asked the team to keep playing how they had played and encouraged them.

Cathedral equalized the game on a corner kick from Grayson Guedon. Before the kick came in, Green Wave attackers stood at the top of the box in a line leaving defenders alone in the box. It worked as Moore connected on a volley tapping it into the bottom left corner of the goal.

“We have never tried it in practice,” Moore said. “It was luck, a great cross, and a good volley.”

Moments later, Moore would get on the end of a through ball and had a one vs one with the keeper. Seeing the Flashes keeper coming out quickly, he tried a chip shoot which the goalie caught.

St. Aloysius would score shortly after the near goal and take a 3-2 lead on Cathedral.

“I think I didn’t get enough on the chip,” Moore said. “I could have gone either side, but the chip would have been the best shot.”

He found redemption for the missed opportunity as he tied the game on a throw-in pass. Patiently letting the ball bounce off a defender, he sprung towards the goal line and fired a shot from a tight angle on goal. It got past the keeper on the near post.

“I thought if I kicked it hard enough, it would go in, and it worked well,” Moore said.

Cathedral will return to action on January 4, 2022 when they take on the Oak Forrest Yellow Jackets in Amite City