Santa’s coming to town: Santa parade takes off once again on Christmas Eve 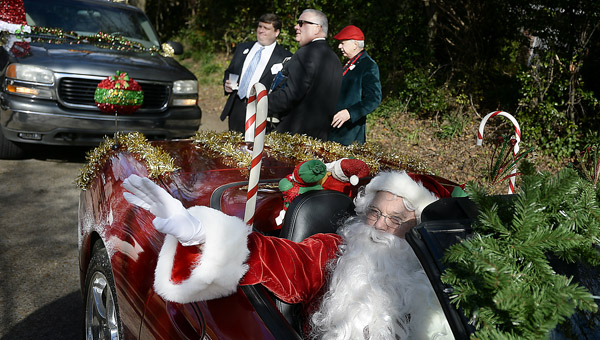 Santa waves from a Corvette at partygoers during one of the stops Christmas Eve during the annual Santa Parade in 2014, lead by Santa throwing candy at spectators. (File photo | The Natchez Democrat)

NATCHEZ — Natchez better watch out on Christmas Eve because Santa Claus will be riding through town once again.

A trademark of Christmas in Natchez is an odd yet magical celebration on Christmas Eve when a committee of businessmen parade through Natchez neighborhoods — throwing candy and stopping for meals and a gift giveaway for children in need before having a Christmas party finale at Santa’s house.

David Hawkins, the 2020-2021 Santa, will be the first of the Santas to do the honor of passing out toys for two years in a row at the Braden School. This is because the annual Santa Claus parade had been canceled last year due to the COVID-19.

This year Santa will be riding in the Rudolf position once again, allowing Hawkins to have the opportunity to participate in the parade and host the private Santa Claus Committee Christmas party after the festivities.