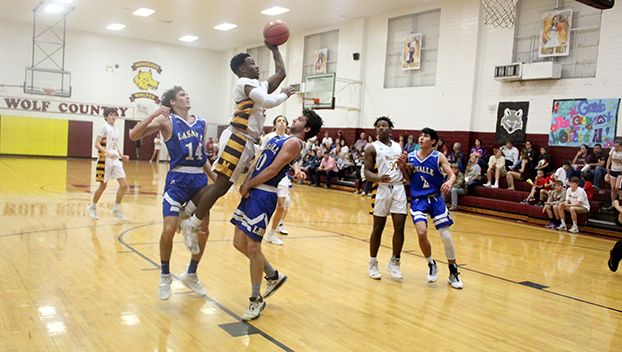 Phillip Atkins jumps to take a shot against LaSalle. He has steadily grown as a player and the game has slowed down for him, head coach Eric Richard said. (Hunter Cloud | The Natchez Democrat)

MONTEREY — The second part of the 2021-2022 basketball season was a frenzy. Monterey head coach Eric Richard said his team played about 11 games in 17 days from Thanksgiving break to Christmas break.

His girls played 10 games and were 6-4. They did close out the stretch with a three game win streak including a win over LaSalle who they had lost to twice this season. Last week, he said his girls played better basketball.

“I think we are playing well in spurts, we just need to play consistently,” Richard said. “We need to be more consistent. Then again, we have won the last three games. I won’t argue with winning. It was good to get to the break with a win.”

Addy LaCaze was a big part of the win over LaSalle as she was the right hand man to leading scorer Allie Lipsey. LaCaze has played basketball at Monterey for the last six years.

She said Richard, who took over the girls team last year, has them constantly working but he makes the game fun. At first, it was an adjustment for them but she had him as a coach in Junior High, she said.

“At first when he started coaching us he would yell at us and we would get scared. Now we know where he is coming from,” LaCaze said.

He is coming from the place of a coach who wants to see his kids grow. LaCaze is one example of someone who has developed as a player, he said.

“She has come a long way since her freshman year,” Richard said. “As a freshman, the game was faster than it was when she was in junior high. It has slowed down for her this year. She can play instead of thinking and it has shown in her play. She understands how to play and has made a lot of progress.”

Monterey’s next game is not until January 4, 2022, at Montgomery. Until then, the girls will have some practices mixed in with down time. Missing game time does take a team out of rhythm, he said.

By hitting the gym over the break they will keep their sharpness in shooting. Conditioning will be the key to getting back in rhythm after the break, he said.

“The break is needed mentally and physically. We have kids who have played a lot of minutes. Getting away from it will do us good. Two-thirds of the season is done and this was our most grueling stretch.”

The boys squad is 15-3 this season and won 10 out of its 11 games since Thanksgiving. Monterey’s only loss came at the hands of Grant, it was a heartbreaker 54-53 final. They have lost to some good teams and played good basketball in every game, he said.

At the moment, Richard said he is pleased with where the team is at but he is not satisfied yet. Wolves can do a better job of rebounding the basketball and be better with their cohesiveness. Their offense could be better, he said.

“Sometimes we rely on the three too much,” Richard said. “I think when that happens our offense gets stagnant.”

One man who will not let the offense get stagnant is Junior Phillip Atkins. He has been at Monterey since the fifth grade and has been crucial to the Wolves offense. The last two seasons he has grown a lot, Richard said.

This year he has taken complete control of the game and runs the point. Often, he can be seen guarding the best opposing players and directing traffic from the top of the key. His younger brother Braden Atkins plays on the team too.

“He makes us go. He can score four points and be in control of the basketball game still,” Richard said. “He makes everyone on the floor better. He is special for us. He is a good kid.”