The Dart: Natchez native hits the course during visit 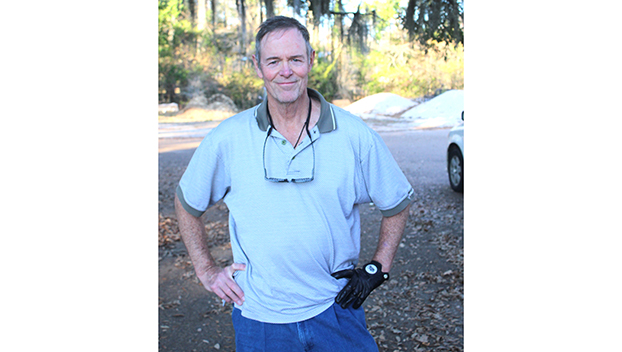 Michael Peabody after a round of golf at Duncan Park Golf Course in Natchez. Peabody is a native of Natchez but has lived in Florida for the past 25 years. He is in town to visit his family for Christmas. (Hunter Cloud | The Natchez Democrat)

NATCHEZ — Natchez native Michael Peabody placed his golf bag in his red Rav4 at the Duncan Park Golf Course close to where The Dart landed Wednesday afternoon. He had just shot a 44 on the course.

Peabody was playing golf with his sister Susan. He has golfed on and off for the past 15 years and enjoys the game.

“I think it is a fun recreational sport which tests your abilities,” Peabody said. “I think it is something you have to work at to improve. You can never be satisfied with your game.”

A graduate of Trinity Episcopal Day School, he went to Washington and Lee in Lexington for two years. Then he went to Mississippi State University for a year before “taking off,” he said.

His field of study was geology because the Miss-Lou was an oil and gas area. He had thoughts of becoming a geologist and returning. Instead, he traveled all over the United States living in several different states. He has lived in Montana to work on the oil field, Fort Lauderdale and Baton Rouge.

“I ended up in Boulder for 15 years working for a company called Mountain Ocean. Skin Trip was one of our best known products. I was a sales rep,” Peabody said. “I moved to Florida, where I have been for the past 25 years. I lived in Jacksonville and St. Augustine. In St. Augustine, I worked for the Transit Bus Authority.”

He is back in Natchez for a Christmas visit. His car still has a Florida license plate on it.

He enjoys the trips to Natchez, he said. After finishing his golf round he planned to have a meal with his parents and family. He can still recall his favorite Christmas memories shared with his family.

“We would cut down big pines in the pasture and put lights and decorations in them,” Peabody said. “It was usually 12 feet tall. We always had giant trees. I can also remember the stockings and getting lots of presents.”