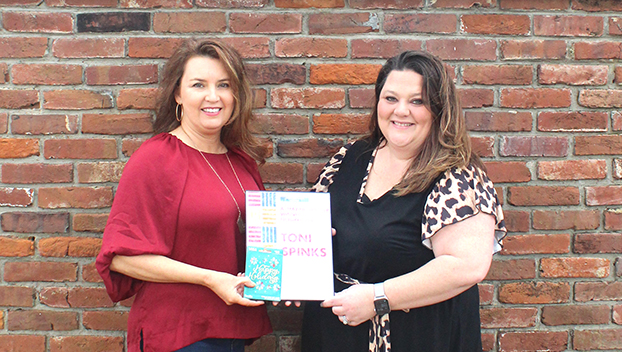 NATCHEZ — For Toni Spinks, a sixth-, seventh- and eighth-grade teacher at Concordia Parish Academy, teaching is both challenging and rewarding, she said.

A pool of online voters named Spinks the most A+mazing Teacher of the Month at the middle school level. The contest is sponsored by Sabrina Dore’ and The Democrat.

Spinks teaches English Language Arts, Science and Quest for Success, which is a career readiness class at CPA.

Spinks started teaching when her daughter, Sidney Spinks, started kindergarten. She wanted a job where she could maximize the time she spent with her daughter at home and also saw there was a dire need for teachers in her community, she said.

She has been teaching for a total of 21 years starting at Jonesville Junior High and later at Block High School before teaching at CPA for the past six years.

Although Toni Spinks initially pursued a career in marketing, she said she quickly discovered teaching was her life’s calling. The reason she has been at it for more than two decades, she said, is because “the good always outweighs the bad,” even in a pandemic.

“The last two years have been the hardest outside of my first year teaching,” Spinks said. “I already teach three different grade levels and last year I had a virtual class for every class in the classroom. Now, most kids are back in school in person. I was ready for them to come back and have them all there so they can all progress at the same pace.”

Spinks said a combination of things, from a great group of students to being at an amazing school with amazing principals, has made dealing with challenges on the job easier.

“I’ve got great kids that I teach and wonderful school that I’m at,” she said. “I plan to retire here. I feel like I’m at the best teaching point in my career strictly because of where I’m at.

“Mr. West Shirley just started as an administrator here this year and he is wonderful and I was fortunate enough to work with Mrs. Nancy Anders before she retired from CPA last year. She is simply the best. She is the most personable, sweetest, most professional friend and boss that I’ve ever been around and I admire her greatly. I have tossed around the idea of going into administration and she is an administrator I would aspire to be like.”

Spinks said as challenging as it can be to teach at the middle school level, she couldn’t see herself teaching any other age group.

“Not many people enjoy the middle school age group but for me, it’s the right niche,” she said.

Through her teaching experience, Spinks said she has learned to be flexible and to “just roll with it.”

“I may have a lesson plan that just may not be working. You’ve got to be adaptable. You have to have something else up your sleeve. Be adaptable, flexible and try to have fun,” she said. “Teaching is not easy under the best of circumstances and we haven’t had the best of circumstances for the past two years.  It’s hard but is one of the most rewarding occupations that you can have. If you decide to pursue it, there will be more good days than bad. In the end, it is worth it.”

Spinks was not only voted to be the most A+mazing Teacher of the Month but was also won the middle school Teacher of the Year nomination from her colleagues and could be competing at the parish level and state level.

To those who voted for her, Spinks said, “Thank you. It’s an honor. I was surprised and shocked but it was a pleasant surprise.”