Lady Storm out of rhythm in return from Christmas Break 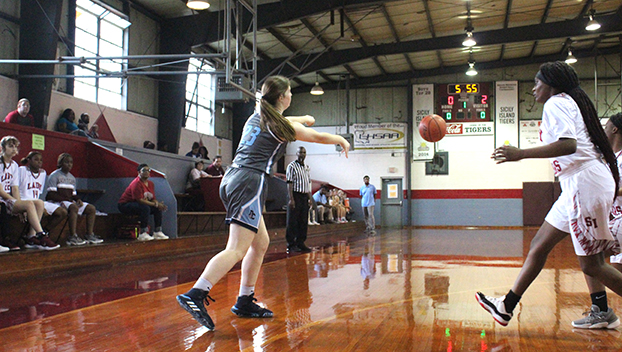 Jayden Boydstun makes a pass from the wing. She had 15 points from five three-pointers in the Lady Storm's 53-28 win over Sicily Island Tuesday afternoon. Delta Charter made nine three-pointers as a team in the win. (Hunter Cloud | The Natchez Democrat)

Delta Charter head coach Ronald Ellis was not pleased with his team’s performance Tuesday afternoon in the Sicily Island Tournament. Lady Storm won 53-28, but Sicily Island put up a good fight in the first half and only trailed by nine at halftime.

It was the first game back from Christmas Break for the Lady Storm, and it showed. They were out of sync and sloppy, he said.

“It takes time to get back to sync in the gym. Everybody has to get back though it’s not just us,” Ellis said. “We just want to see their bet better and get back on track. If we play like this Wednesday against Ferriday we will lose by 50.”

The Lady Storm did have a good game of shooting from the long-range making nine three-pointers. He said when they hit those long-range shots teams have to respect their ability more. It opens the court up and does not limit Delta Charter to layups.

Jayden Boydstun nailed five three-pointers in a row in the second half. Her shots kept falling as the Lady Storm pulled away from the Lady Tigers. She said her long-range shot has been on and off for her this season. Tuesday, it was on.

She said she plays basketball for fun and stays in shape for the upcoming softball season. Her offensive work helped carry the team, as did Roniya Ellis, who led the team with 23 points.
Delta Charter plays Ferriday at 11 a.m. Wednesday. The game will offer another chance for the team to get back in rhythm.

“It takes some getting used to when you return from break,” Boydstun said. “We have to focus on the mechanics and get back in the groove of it.”