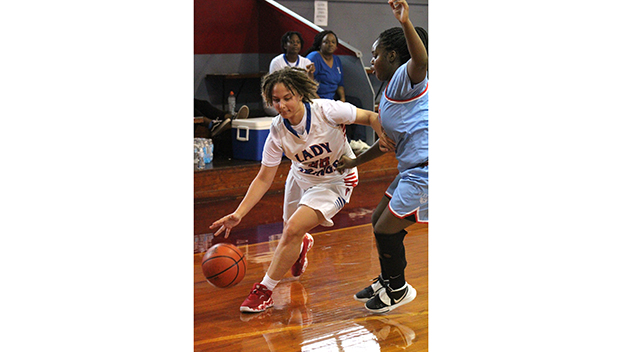 Morgan Wyatt led the Lady Vikings with six points in their loss to Block Tuesday morning at the Sicily Island Tournament. (Hunter Cloud | The Natchez Democrat)

SICILY ISLAND, LOUISIANA — Vidalia’s return from the Christmas Break got off to a positive start. They went on a 7-2 run against Block to start the game.

However, Block came back with a vengeance to win 41-12  Tuesday morning. Lady Vikings head coach Tema Larry said they faced a lot of pressure after the strong start.

“They were focused and we tried some new things. Of course when the pressure hit they reverted back to what they were used to,” Larry said. “It’s still a game. We aren’t down about it. I’m patient with them because someone was patient with me.”

While the final score may not reflect growth, the visual product on the court is improved. A month ago, Vidalia struggled to move the ball around and players were constantly getting trapped.

Now, the Vikings are passing the ball around and stretching defenses to create space for shots. Morgan Wyatt led the team with six points in the game.

“They have improved every game,” Larry said. “There are a lot of girls who don’t have basketball knowledge. There is a lot to take in. To say they have gotten a lot out. We didn’t start until after football season. We are continuing to learn.”

Vidalia plays against Madison Parish Wednesday at 1:30 p.m. and Thursday against Sicily Island at 11 a.m.

They will have an opportunity to win their first game of the year in those games. Larry said she is staying positive.

“Sooner or later we will get a victory or a couple,” Larry said. “I’m happy they are keeping a fight and keeping it going. I’ll keep believing and encouraging them. I’m continuing to walk in victory.”