Andrew Sessions: State honors for Player of the Year 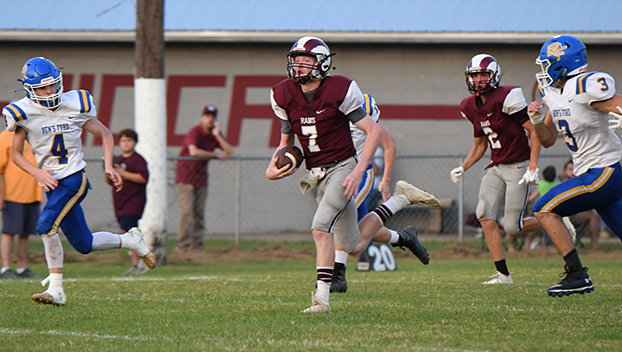 WOODVILLE —  Wilkinson County Christian Academy quarterback Andrew Sessions threw for 2,300 passing yards and 28 touchdowns, rushed for 1,132 yards and 20 touchdowns , was named the MAIS 1A Region 3 All-District Offensive MVP for 1A and took 50% of the snaps in the MAIS all-star game to finish his senior season. He led the Rams to the Eight-man semifinals and they were a touchdown shy of making the MAIS championship game.

This season was the second year he played football at WCCA. His stats, accolades and leadership are why he is the Miss-Lou’s 2021 All-Metro football player of the year. Head coach Randy Holloway told him the news.

“I was a little surprised, we had a good team and we have some great players in the area,” Sessions said.

Before joining the Rams football team his junior year, he only played Flag Football on occasion. He is an athlete and competes in basketball and baseball. Holloway convinced him to join the team.

His brother Ben Sessions was a senior so he decided to play football to be with his brother and WCCA had a good team last year. They would finish the season 11-1.

Andrew’s younger brother also plays for the Rams. Jacob Sessions is the backup quarterback for the Rams and is under the wing of Andrew. The Sessions brothers are close, he said.

“I was teaching Jacob some new stuff this season,” Andrew said. “We are close. We played a lot of sports together. We had a good connection playing as kids in the yard.”

In his 24-game career with the Rams, wins against Riverdale Academy, Tensas Academy last season and Christian Collegiate in Gulfport this season stood out to Andrew.

While the Rams compete in 8-man football, Andrew played in the MAIS All-Star game which is 11 man football. He took turns playing quarterback.

Playing 11-man football was a different experience, he said. In eight-man, there are less people to block on the line of scrimmage and he doesn’t have to worry about a safety.

Football gave Andrew friends and camaraderie. Its what he enjoys about the game. He said he enjoyed the practices, playing in games, helping teammates and the fellowship they would share.

His closest teammate on the Rams is senior wide receiver Roderick “Slim” Bailey. They met on the JV basketball team in ninth grade. On the football field, Andrew and Bailey are an explosive duo. Bailey is a running back and made his mark by rushing for 1,146 yards and 19 touchdowns this season.

“Over the years we have grown close. We have a connection on the field too,” Andrew said.

WCCA’s loss in the football semifinals was a tough one but Andrew has more time to compete. He and Bailey took the basketball court together in their last season with the Rams.

Looking to the future

Andrew, who was on the way to Memphis Monday morning to watch Mississippi State play against Texas Tech Tuesday, will attend MSU in Starkville. His plans are to study business and economics so he can become a financial advisor.

WCCA has been his school since fourth grade. When he graduates, he will leave a school with a strong family feeling and close connection.

“I’ ll miss my coach (Holloway),”  Andrew said. “I’ll miss the group and the team. Friday nights were always fun. I enjoyed it. I want to thank my teammates, friends and family. I want to thank God especially and coach for everything.”

Andrew completed his final pass as a Ram when he handed the quarterback reins to younger brother Jacob.

“I think he will be a pretty good quarterback,” Andrew said.