‘Back with the history,’ St. Mary Basilica reopens after repairs 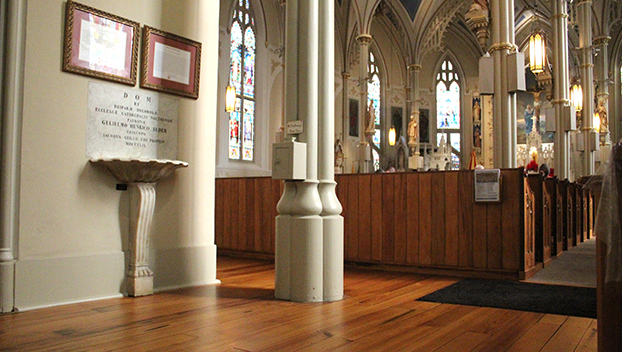 NATCHEZ— St. Mary Basilica’s historic sanctuary reopened earlier this month for services and visitors after a six-month lapse in occupancy as winter storm damages were repaired.

When much of Natchez froze during a winter ice storm in mid-February, so did the downspouts outside the church, causing water to infiltrate St. Mary’s.

The Rev. Scott Thomas, the pastor at St. Mary Basilica, said the church sanctuary had water damage on its Main Street facing wall, on the floor, church pews and down into the basement.

He added nothing that couldn’t be replaced was damaged.

After some cleanup, the church continued to hold services through April before closing for restoration work in May, he said.

“We had to rip out all the floor in the basement and replace ceiling tyle on the main floor,” he said. The tile on the sanctuary floor had been stripped down to restore the church’s original cypress wood floors. The church pews were also removed from the building temporarily to be refinished by Midsouth Church Construction in Louisiana, he said.

The process has taken approximately six months. During that time, Masses were held at the Cathedral school gymnasium and funeral services were hosted elsewhere. Apart from three weddings that contractors were able to work around, all church functions were done off-site, he said.

“Everyone is happy to come back into the church,” Thomas said. “We’re glad to be back in the beautiful Basilica—back with the history.”

Construction on St. Mary Basilica first began in 1842 and took 40 years to reach completion. With new carpet, restored church pews and the original wood floors exposed, Thomas said the church now looks different in a good way. The bulk of the restoration cost was covered by insurance, he said, adding church “came out of pocket” for just a handful of items to complete the work.

“We’ve had a very positive response. The pews are lighter, the floor looks different and we have a different style of carpet. It has brightened it up,” he said. “We’re glad to be doing things back at home.”

EYES ON SCENE: 911 implements new program to prepare responders before they arrive