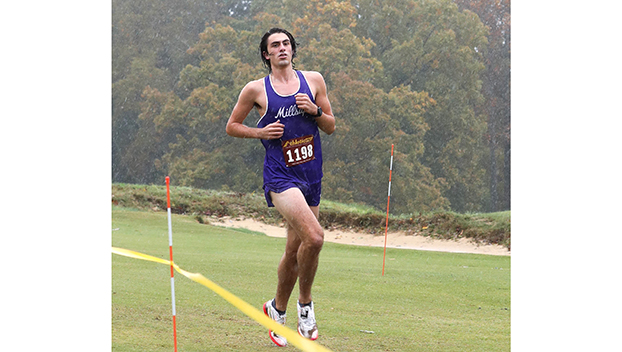 Ryan Skates is a Cathedral alumnus and currently runs at Millsaps. His fastest 8K time this season was 29:30.7 at the Huntington Invitational in Montgomery, Alabama. (Courtesy Photo | Millsaps Athletics)

JACKSON — Millsaps runner Ryan Skates finished his fall semester of college with a chemistry final and the challenges of having competed at the collegiate level with the majors.

His first semester was a little bit of an adjustment, Skates said recently. He had to learn how to better manage his time to get school work done. During the week, his cross country team would have early morning runs, sometimes as early as 5 a.m., so he had to get his work done before bed.

Cross country at the collegiate level is different because of all the mileage runners have to log. At Cathedral, the team typically ran 20 miles a week. Skates said he averages 40 to 50 miles a week at Millsaps. Sundays include a 15-mile run.

“I had a little bit of trouble at first but as we went on it got easier,” Skates said. “I found if I ran by myself I was unmotivated. Running with the team gets you going. You get the same sense of teamwork I had in high school. You get close to the guys you run with. I pretty much hangout with all the cross country runners. We are close even outside of the sport.”

The increase in training distance accounts for college cross country races being 8K, three kilometers longer than a race in high school. He ran in four 8K meets with his fastest time being 29:30.7 at the Huntington Invitational.

Huntington is a course in Montgomery, Alabama, which features challenging terrain. His race started with a downhill stretch before the runners started a mile long incline. Once the incline leveled out, they faced a quick up and down dip. He said it was an exciting but challenging course as he set his personal record.

“Getting new PRs for a new distance is exciting,” Skates said. “I’m getting the time down and progressing. It is rewarding, just seeing what I can do. I was happy because I got a sub 30 minute 8K on a challenging course.”

While a runner at Cathedral, Skates was known for his flowing mane. He kept the same hair style in college, although his mom told him if he cut it he would shave some minutes off his time, he said.

Recently, he got a trim but it is still long. Like his hair, his love for the sport has not changed since high school.

“I still love the sport. I might like it more now,” Skates said. “It was always a big part of my life in high school and now it is even bigger. It is a positive thing. I feel like I’m gaining a lot out of it.”

This period between cross country and track season is an offseason from team practices but runners are still training by themselves. Skates, who competed at the State Track meet in the one-mile, is looking forward to the track season.

“I’m ready to try some new races. Some of the races are different, for instance you have the 1500 meter, 100 meters short of a mile,” Skates said. “I’m excited to see if I can get on some relay teams. I may do some longer races on the track. I’m just excited to try some new things and meet new people. Not everyone who runs track does cross country.”