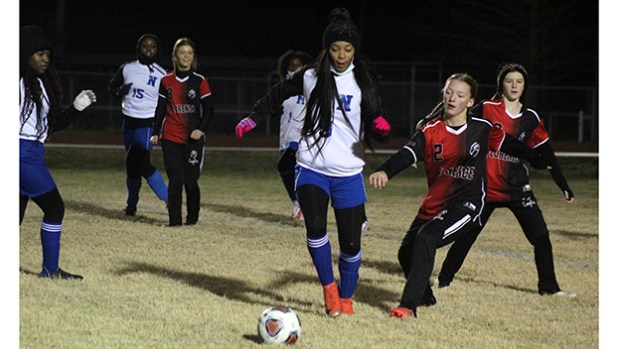 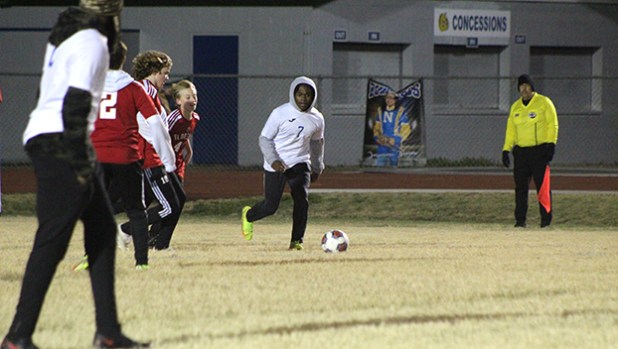 Natchez soccer player Javis Johnson pushes the ball up the pitch against Florence. The Bulldogs created two goal scoring opportunities in the game and had some good spells of passes. They lost 7-0 Monday night. (Hunter Cloud | The Natchez Democrat)

NATCHEZ — Natchez High School returned from the Christmas Break to play Florence in soccer Monday evening. The Bulldogs and Lady Bulldogs lost 7-0 to Florence in their first soccer game in a couple of weeks.

Head coach Josh West said a few of his players were not in town due to the holidays to practice. Last week, they had one of the best weeks of practice all season from the kids in town.

They have improved as the season has progressed even if the scoreboard doesn’t reflect that growth. Lady Bulldogs looked better with their touches and passes and were able to create a goal-scoring opportunity on a counterattack in the second half. They also made it to the 21-minute mark in the second half before the mercy rule went into effect.

“I’m happy with it. This is a team who jumped out last time. We held on for a while tonight,” West said. “It is big for us because we are moving in the right direction.”

His girls are showing a better understanding of the game. Against Florence, some of the players were starting to trap the ball and took time to pick out passes. Others are still swinging their foot at the ball, but they are starting to play with a flow.

Similarly, the boys are improving their game, and it is noticeable when they can string a series of passes together. In practice, they have worked on making runs, and long passes to create opportunities. They are also starting to drop the ball back to create space for those types of passes.

Natchez had an opportunity to score against Florence twice in the boys’ game. The first opportunity came when Darrius “Squirrel” Williams got on the end of a through ball and fired a shot at the keeper. It was put behind for a corner by a defender where the Bulldogs put in two crosses. In the second half, Jessie “Batman” Grayson had another opportunity to score, West said he was proud of their effort.

“We are trying to do long balls and trying to learn the game,” West said. “We are learning you can create space by passing backward. If we can do that, we can play real soccer. The effort is there, but the know-how has to be there.”