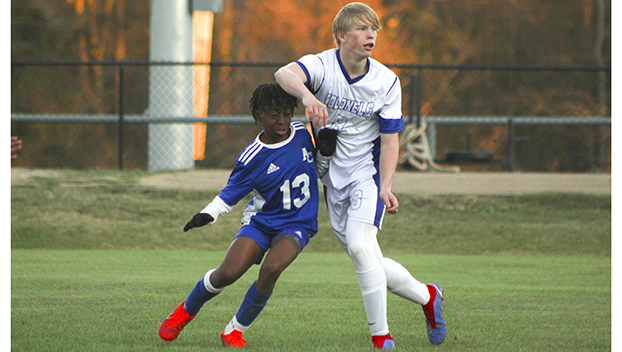 AC’s JaMichael Owens tries to hold his own against a Copiah Academy forward inside the box Tuesday afternoon. He is one of several young players who had to start the game after some seasoned players did not go to practice before the game. AC lost 9-0. (Hunter Cloud | The Natchez Democrat)

NATCHEZ — Copiah Academy scored six goals, four of them from corner kicks, in the first half against ACCS Tuesday afternoon. AC would give up three more goals in the second half to lose 9-0 on a mercy rule.

Head coach Chris Hughes said several Rebel starters were on the bench for the first half because they did not show up to practice. Those players did come into the game in the second half, and AC played much better.

“It was a tale of two halves. In the first, they crowded our goalkeeper on corner kicks,” Hughes said. “Once we put in our more seasoned players in the second half, it was different. We have to get better with people coming to practice and being held accountable. That score won’t happen again.”

He said in the absence of starters, younger players stepped up for the team. JaMicheal Owens was a thorn in the side of Copiah Academy players who were bigger than him. Nick Beach kept the backline together and organized. He made several slide tackles to break up Copiah Academy attacks. Brody Watts came in to play goalkeeper after Peyton Beach was hurt in the first half and made some big saves in the second half.

After the game, senior Louis Loy was silent on the bench. He is concerned about their direction, and he has seven more games before his career is over. Hughes’ go-to men are Samuel Merriett and Loy. The veteran players were trying to do everything to help their team.

“They are the anchors of this squad,” Hughes said. “They are my eyes and ears. They are my go-to guys.”