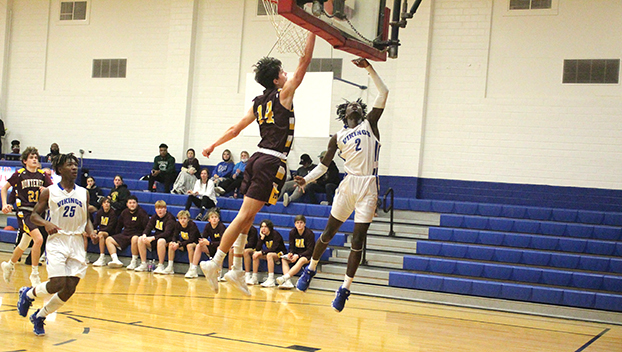 Nathan Blount scored 21 points and led Monterey to a 54-44 win over Vidalia High School. The game was originally not on the schedule this season, but Monterey had a game against Montgomery get canceled this week, and they squeezed it in Thursday night.

Vidalia got off to a slow start and scored just 12 points in the first half of play, while Monterey got off and rolling with 28-points. Viking head coach Damus Smith said they were not ready to play.

Little things like rebounding, dribbling and passing are beating the Vikings. He is frustrated because they have played so many games where they scored less than 20 points in the first half and had to fight an uphill battle in the second half.

“They aren’t ready. It’s not like we didn’t prepare all week,” Smith said. “Between yesterday and 7 p.m, I don’t know what happened. We better get better, and we better get better in a hurry. We just have to come out ready to play ball.”

Monterey’s defense was ready to play ball as they used a zone defense to slow down the Vikings. Conner Boyd, a tall and lanky guard, utilized his height inside to make some key blocks in the first half.

The Wolves played in their first game in three weeks and needed a spark to hit the ground running. Boyd supplied the spark when he slapped a Vidalia shot off the bottom of the backboard.

“It got us going pretty good. He hit the bottom of the backboard with his shot, and I knew I could get it,” Boyd said. “Any time you get a good block, it gets everyone up and going. I get a few blocks every game. I’ve made some soft blocks, but none like that.”

Wolves Head Coach Eric Richard told the kids in the dressing room before the game ‘they would be okay.’ He wasn’t sure how they would execute against the athletic and quick Vidalia team.

His team played well in its return from a three-week absence from competitive basketball. Monterey could have gone four weeks without a basketball game had Vidalia not scheduled them last minute. In the past, they played each other once or twice a year. This season, it had not worked out in the original schedule.

“He helped us out, and he didn’t have to play us,” Richard said. “I’m indebted to him. It was a good way to start the last part of our season. It was good to get out here and see the ball go through the baskets.”

Vidalia’s gym serves as a second home for Monterey when they have a home playoff game.