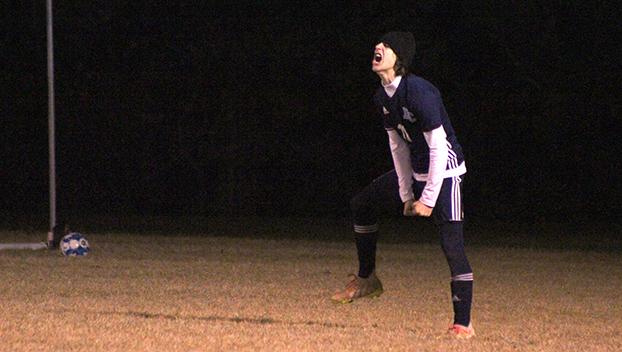 Layne King celebrates his first goal in high school soccer. It was the only goal Delta Charter scored as they lost to River Oaks 7-1 Friday night. (Hunter Cloud | The Natchez Democrat)

Ferriday — Delta Charter and River Oaks played with nine men Friday night as the Storm fell 7-1. Injuries, sickness, and some players still out of town from the Christmas break meant Delta Charter was shorthanded.

Storm Head Coach Jeremiah Rios said the River Oaks coach agreed to play with nine men to give them a fair chance.

“It was good sportsmanship on his behalf,” Rios said.

Playing with nine players on the field creates a different dynamic in the game. There is more space for passing and making runs, and the pitch is not as congested.

Open space created opportunities for River Oaks to take shots on goal, which kept senior Payten Roberts busy. He is one of the team leaders and the Storm’s captain Friday night. Time after time, he was called upon to make a save, and did. He also showed no fear in several diving attempts.

“He is hardworking, and he is very coachable,” Rios said. “He is playing a new position, but what makes it easy for him is his coachability. He has an eagerness to learn. It makes him fun to coach. It doesn’t take long for him to pick something up.”

This season is the first year he has played goalkeeper for the Storm.

Friday night had another first when Layne King scored his first goal. He received a through-ball pass and took a beautiful shot on goal.

River Oak’s goalkeeper never had a chance as the shot found the bottom left corner of the goal. It was King’s first goal in his first year of playing high school soccer, he said.

“Before the game, my friend Kenneth was giving me pointers. He said it is more about placement than it is about power,” King said. “I went out there and did what he said. It went perfectly. Coach is always saying we are trying to get a corner kick, put it in the corner of the goal.”

He said he knew it was a goal as soon as he shot the ball.

After the game, his teammates ribbed him for his celebration, which consisted of hooting, hollering and finger-pointing. One player told him he should have taken off for the corner flag to celebrate. He was so excited he didn’t know what to do.

“It is an unexplainable feeling,” King said. “It was crazy. I didn’t know what to do.”