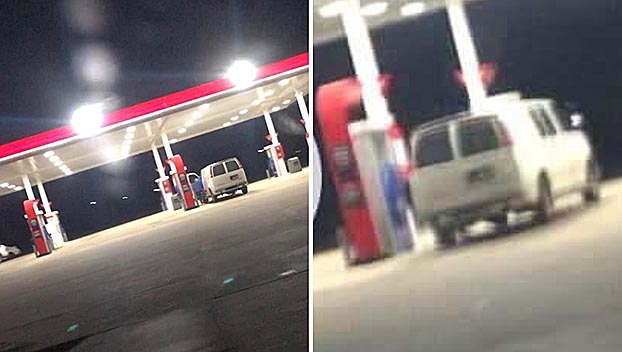 Web photos Jenny Aguilar White shared these pictures on social media of a white van that seems to have followed her from Delhi to Jonesville after a ballgame Tuesday night. Ferriday police later warned of a ‘suspicious’ van in the area that was seen by a woman walking early Wednesday morning.

FERRIDAY — Ferriday Police warned of a white van that had followed a school bus through the Catahoula and Concordia Parish area on the department’s social media page.

Their post states the driver was “exhibiting generally suspicious behavior” and asks citizens to be cautious and pay attention to their surroundings.

“Keep an eye on your children and travel in groups for safety. If anyone sees anything suspicious, contact us at 318-757-3606 or if it is an emergency call 911. Please be safe and God Bless!”

“He had followed a bus returning from a game and followed them for quite a while,” Stevens said.

“A woman was walking and saw it, but we never made contact with the van,” he said. “We put the news out there trying to make the public aware. It seems to be the same van.”

Jenny Aguilar White shared on social media Wednesday that she saw a white van around Delhi, Louisiana, as she was coming home from a ballgame in Forest.

She described the van and the driver in her social media post, with pictures of the van.

“It waited in a parking lot to see where we were turning. It got behind us and followed us,” she states. “We tried to get him to pass and he wouldn’t pass us. We started driving faster and he stayed right on (our) tail. When we got to Wisner he passed us and turned around like he was going back the other direction. When we got around Harrisonburg, we noticed a van behind us. When we got to Jonesville, we realized it was the same van. We pulled into Exxon and he followed us. A black man wearing a blue jacket and blue beanie got out of the van pretending he was getting gas. We left and had the police on the phone. We went to the police station and they said they followed the van out of Jonesville.”