The Dart: Brixey enjoys first days on his first job 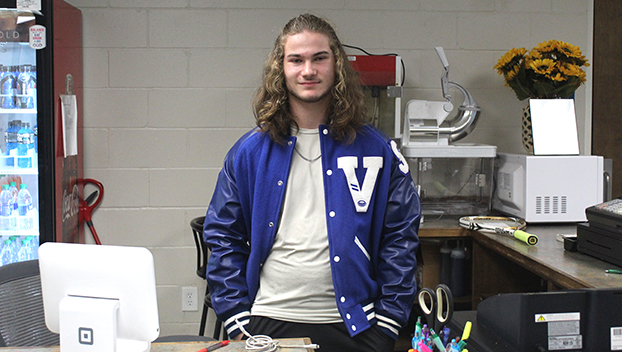 NATCHEZ — Vidalia High School junior James Brixey was on the second day of his first job at the Duncan Park Tennis Pro Shop close to where The Dart landed Thursday afternoon.

Brixey said he had applied for several jobs but did not get an interview until his football head coach Mike Norris called him into his office. Norris’s friend Frankie Spence needed help at the Duncan Park Tennis Pro Shop, and he was hiring. So Brixey applied.

“Frankie called me to tell me I got the interview while I was duck hunting. We had a group of ducks land in front of us and the phone vibrated,” Brixey said. “I reached for my gun, and then I reached for my phone and saw it was a random number, so I didn’t answer. He then sent me a text saying who it was, and I told him I had been duck hunting. I called him later that day, I came in last Wednesday for my interview, and I started Wednesday.”

Brixey has played football for eight years and has played every sport from baseball, basketball, and soccer. He recently started playing tennis.

When he isn’t playing football, Brixey is at home playing guitar. Music is one of his biggest hobbies. He is self-taught and said he can learn to play a song by ear. Currently, he only plays for churches and family. One day, he would like to do something with his musical expertise. His guitar playing began with a Christmas gift.

“I woke up and opened the gifts we got. I remember my dad got me a red and white squire Fender Stratocaster,” Brixey said. “I had it until four or five years ago when I traded it in to get a Telecaster. Jimi Hendrix is my favorite guitarist.”

In addition to playing electric guitar, Brixey can play bass, drums, and the Ukulele. The only thing he is missing is vocals, he said. One of his favorite songs he likes to sing is Johnny Cash’s hurt in a Carl Wheezer voice, a character in Jimmy Neutron.

He has a plan for what he wants to do after high school. “If I don’t get a scholarship to play football anywhere, I want to go to LSU, Louisiana Tech, or Louisiana Monroe for Kinesiology and audio engineering,” Brixey said. “I’m dead set on it. Now I’m a junior, and it is what I want to do. I’m hoping that I will be able to do something with my guitar in my free time.”