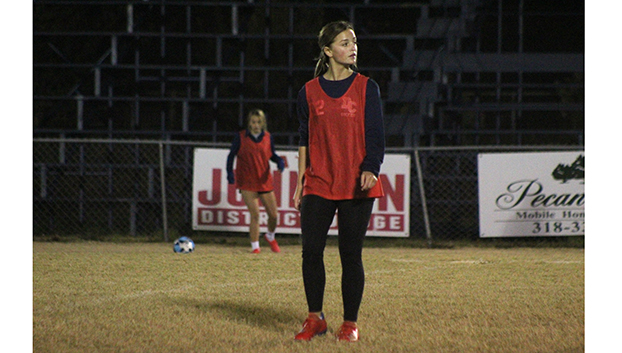 ALEXANDRIA — Delta Charter played another tight game but ultimately fell 1-0 to Grace Christian after conceding a penalty kick 20 minutes into the first half. Lady Storm Head Coach Christal McGlothin was frustrated with the call and the final result.

Defensively, her team has played well the last few games except for a 3-0 loss to Menard. Delta Charter stepped it up against Grace Christian. Chloe Smith and Jaci McFarland played their hearts out in the midfield to lead the defensive effort.

Goalkeeper Addie Johnson made numerous saves in the game to keep it close. Grace Christian out-possessed the Lady Storm, but it was still a game where Delta Charter put itself in a position to win. The penalty kick never changed the game’s momentum, McGlothin said.

“We played hard. I told them when we came off the field. I didn’t have anything negative to say,” McGlothin said. “We played well against a very tough team defensively. Scoring was difficult, but we played tough defensively. It is one of those games which makes you sick. The whole game went that way. We didn’t let it get us down.”

Thursday night was an opportunity for McGlothin to give her younger girls plenty of playing time. She said the game against Wossman could have ended in the first half. However, she substituted six players from the bench and saw the game to 9 minutes left before they scored the eighth and final goal.

“I was so very proud of all of them. I have seen improvement in every one of those young and inexperienced girls,” McGlothin said. “Keep in mind, I have 9 of my 21 players that have never played soccer before. They went in and played their hearts out.”

Delta Charter will play its senior night game against St. Frederick this Thursday. The kickoff is at 5:30 p.m.