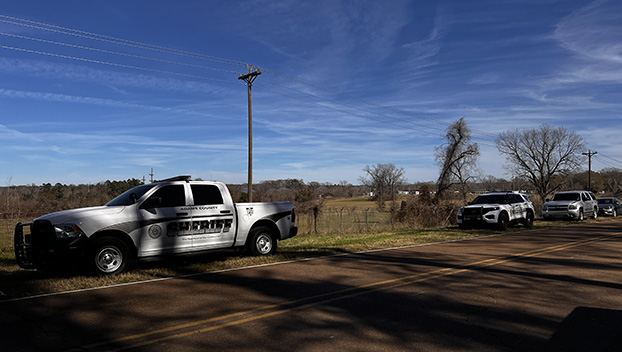 First responders arrive at Carthage Point Road Tuesday afternoon to remove a man’s body from a tree after an accidental death. (Sabrina Robertson | The Natchez Democrat)

NATCHEZ — Local authorities called for the help of a tree service to help them remove a man’s body from a tree on Carthage Point Road near Lower Woodville Road Tuesday afternoon.

“Jan. 3 was the last time he spoke to family,” Patten said. “A friend of the family called him last Saturday. When the friend couldn’t reach him for several days, that friend, his daughter and other family members came out to do a welfare check. When they arrived, they found him hanging from the tree by his legs in what appears to be a logging accident.”

Coroner James Lee said Jackson’s death was ruled an accident caused by blunt force trauma to his head when he fell and his legs were caught between the tree and a cut tree limb.

Adams County Sheriff’s Office, Emergency Management the Natchez Fire Department were all called to the scene.

“This was a unique situation that we had to go beyond our resources to get help with,” Patten said. “The crane operators were out of town, so we started reaching out to professional tree cutting services.”

After multiple attempts, Patten said Brian Byrd of Brian’s Lawn & Service stopped in the middle of working on a project and dropped what he was doing to help.

“They were able to remove the tree and make it safe for us to retrieve the body,” Patten said. “This is a tragic time for his family and our prayers are with them.”

Byrd is no stranger to helping out in times of need. The Democrat featured Byrd’s tree company cutting a tree that fell on his neighbor’s house during Hurricane Delta without charging for the service.

On Tuesday, Byrd said he was in the middle of working on one of his real estate properties when the sheriff called.

Patten reminded the community to exercise caution when working in potentially hazardous situations.

“When you’re doing projects like this, be safe and have someone with you at all times,” he said. “No matter how experienced you are, things could still go wrong. We also want to thank Mr. Brian Byrd and his tree service. If it wasn’t for him and his team, we would probably still be out there. … I appreciate him helping us during our time of need. He blessed us and this man’s family with his help and I hope people return the blessings to him and his company.”